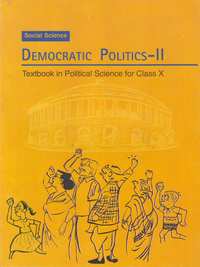 State the various functions political parties perform in a democracy.

What are the various challenges faced by political parties?

Suggest some reforms to strengthen parties so that they perform their functions well?

Answer the following question in one sentence

What is a political party?

What are the characteristics of a political party?

Match List I (organisations and struggles) with List II and select the correct answer using the codes given below the lists:

Who among the following is the founder of the Bahujan Samaj Party?

What is the guiding philosophy of the Bharatiya Janata Party?

Consider the following statements on parties.

Α. Political parties do not enjoy much trust among the people.

C. Parties are not necessary to run governments.

Which of the statements given above are correct?

Read the following passage and answer the questions given below:

Muhammad Yunus is a famous economist of Bangladesh. He received several international honours for his efforts to promote economic and social development for the benefit of the poor. He and the Grameen Bank he started, jointly received the Noble Peace Prize for 2006. In February 2007, he decided to launch a political party and contest in the parliamentary elections. His objective was to foster proper leadership, good governance and build a new Bangladesh. He felt that only a political party different from the traditional ones would bring about new political culture. His party would be democratic from the grassroots level.

The launching of the new party, called Nagarik Shakti (Citizens’ Power), has caused a stir among the Bangladeshis. While many welcomed his decisions, some did not like it. "Now I think Bangladesh will have a chance to choose between good and bad and eventually have a good government," said Shahedul Islam, a government official. "That government, we hope, would not only keep itself away from corruption but also make fighting corruption and black money a top priority."

But leaders of traditional political parties who dominated the country’s politics for decades were apprehensive. "There was no debate (over him) winning the Novel, but politics is different − very challenging and often controversial," said a senior leader of the Bangladesh Nationalist Party. Some others were highly critical. They asked why he was rushing into politics. "Is he being planted in politics by mentors from outside the country," asked one political observer.

Do you think Yunus made a right decision to float a new political party?

Do you agree with the statements and fears expressed by various people? How do you want this new party organised to make it different from other parties? If you were the one to begin this political party how would you defend it?

NCERT solutions for Class 10 Social Science Political Science (Democratic Politics 2) chapter 6 (Political Parties) include all questions with solution and detail explanation. This will clear students doubts about any question and improve application skills while preparing for board exams. The detailed, step-by-step solutions will help you understand the concepts better and clear your confusions, if any. Shaalaa.com has the CBSE Class 10 Social Science Political Science (Democratic Politics 2) solutions in a manner that help students grasp basic concepts better and faster.

Using NCERT Class 10 solutions Political Parties exercise by students are an easy way to prepare for the exams, as they involve solutions arranged chapter-wise also page wise. The questions involved in NCERT Solutions are important questions that can be asked in the final exam. Maximum students of CBSE Class 10 prefer NCERT Textbook Solutions to score more in exam.

Get the free view of chapter 6 Political Parties Class 10 extra questions for Class 10 Social Science Political Science (Democratic Politics 2) and can use Shaalaa.com to keep it handy for your exam preparation