Koneru Humpy : Thank you! This is my biggest win in the women's circuit. This is very significant, considering that it has come in an event which had three former world champions.
Avik : Indeed! Please tell us something about yourself, Ma' am!
Koneru Humpy : I was born in Gudivada, near Vijaywada, in Andhra Pradesh on March 31, 1987. I was originally named 'Humpi' {which means champion) by my father Mr Koneru Ashok, who later changed the spelling to Humpy, to give the nrune a Russian flavour. I write my family name , Koneru, before my given name, as is the convention with the Telugu speaking people. I started playing chess when I was 5 years old.
Avik : Who introduced you to the game?
Koneru Humpy : My father acquainted me with the game. He is also my first coach. I first showed interest at the age of 6 years, when I watched him play a game and suggested a move. Indeed it was the move that actually got me into the game.

Avik : Your father left his teaching profession to make you a champion !
Koneru Bumpy : Yes, when I took the 4th place in the Indian Under 8 Championship in 1995, he decided to leave his career and dedicate his time to me.
Avik : And you had won four World Championship at a very early stage.
Koneru Bumpy : Yes, the World Girl Under 10, the World Girls Under 12, the World Girls Under 14 and World Girls Junior Chrunpionships. I acquired my IM title in 1999 and in May 2002, I achieved my 3rd GM Norms in Elekes Memorial Grandmaster Tournrunent in Budapest.
Avik : You held the record from 2002 to 2008 for the youngest woman ever to become a grandmaster!
Koneru Bumpy : Yes, I achieved it at the age of 15 years, 1 month, 27 days, beating Judit Polgar's previous record by 3 months; which was later lost in the Women's World Chess Championship in 2008 to Hou Yifan. I won the World Junior Girls Chess Championship in 2001 and won the edition or North Urals Cup, the Women's Super Tournrunent held in Krasnoturinsk. In 2006, I participated in the Women's World Chess Chrunpionship, but my crunpaign had to end early in the second round. I played in the first board of Monte Carlo Chess Club and won the last two editions of the European Club Cup.
Avik : You have got some awards also !
Koneru Humpy : Yes, Arjuna Award in 2003, Padmashri Award in 2007 and Raja-Lakshmi Award in 2008. 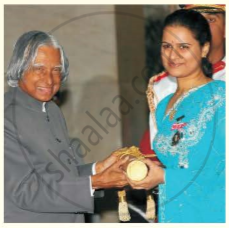 Avik : In India, many young chess players are ready to take a break in education and are fully focussed on chess preparations. What are your views?
Koneru Humpy : I don't think that taking up chess as a career and completely neglecting studies will be necessary at an earlier stage. After getting to a certain level in the game, they themselves should decide their preferences i.e. whether to play seriously or not.
Avik : What advice would you offer to parents of enthusiastic and talented chess children?
Koneru Humpy : Parents should not compel children to play chess. If children are genuinely interested in the game, they should encourage them. But they shouldn't hurry to get results. 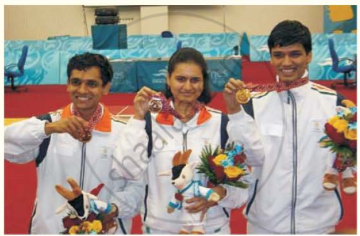 Avik : How often do you exercise? Do you think daily physical exercise can help a chess player to cope with the pressure and increase the brain's ability to concentrate? Koneru Humpy : I spend around one hour per day on physical exercise. Exercise is a must for every chess player. As the proverb says, 'a sound mind in a sound body'. Exercise shows a lot of impact on the brain.
Avik : Thank you for talking to me and giving valuable advice.
Koneru Humpy : Thank you.

Grandmaster Koneru Humpy is visiting your school and you, as the Sports Captain, have to introduce her in the school assembly. With the help of Question 2, write out the Bio-sketch.

Know all about Chess . Read and enjoy :

You now know a little about Koneru Humpychess player but do you know how to play chess? Let's know more about it:
Have you ever played chess? Did you know that chess is the oldest skill game in the world? But chess is more than just a. game of skill. It can tell you much about the way people lived in medieval times. If you look at the way a chess board is set up, then study the pieces and how they are used, you will realise that chess is a history of medieval times in miniature. The six different chess pieces on the board represent a cross section of medieval life with its many ceremonies grandeur ,and wars .

Chess was played many centuries ago in China, India, and Persia. No one really knows for sure in which country it originated. Then, in the eighth century, armies of Arabs known as Moors invaded Persia. The Moors learned chess from the Persians. When the Moors later invaded Spain, the soldiers brought the game of chess with them. Soon the Spanish were playing chess, too. From Spain, the popularity of chess quickly spread throughout all of Europe

Europeans gave chess pieces the names we know today; they probably had trouble pronouncing and spelling the Persian names, so they modernized them to reflect the way they lived. Today, the names certainly aren't modem but a thousand years ago they represented the very way in which both ordinary people and persons of rank lived their lives.

The pawns on the chess board represent serfs, or labourers. There are more of them than any other piece on the board, and often they are sacrificed to save the more valuable pieces. In medieval times, serfs were considered no more than the property of landowners, or chattels. Life was brutally hard for serfs during this era of history. They worked hard and died young. They were often left unprotected while wars raged around them. They could be traded, used as a diversion, or even sacrificed to allow the landowners to escape harm.

The castle piece on a chess board is the home, or the refuge, just as it was a home in medieval times. In Chess, each side has two castles, or rooks, as they are sometimes called.

There is a bishop in the game of chess, who represents the church. The Church was a rich and mighty force in medieval times, and religion played a large part in every person's life. It is no wonder that a figure that represented the concept of religion found its way into the game. A bishop was the name for a priest in the Catholic church who had risen through the ranks to a more powerful position. In the game of chess, there are two bishops for each side.

The queen is the only piece on the board during a chess game that represents a woman, and she is the most powerful piece of the game.
The king is the tallest piece on the board, and is as well defended on the chessboard as in medieval life. In medieval times, the surrender of the king would mean the loss of the kingdom to invading armies and that could mean change for the worse. It was to everyone's advantage, from the lowest serf to the highest-ranking official, to keep the king safe from harm.. The king is the most important, but not the most powerful piece in chess. If you do not protect your king, you lose the game.

The next time you set up your chessboard and get ready 7 to play a friendly game or two, think of chess as a 6 history lesson. The pieces on the board represent a way 5 of life that is no more, and the real life dramas that occurred in medieval times are now only a game.

On the basis of your reading of the exctract on Chess , complete the following table with your partner .

Given below is some information about Jesse Owens, one of the most famous athletes of all times. His friend is planning to write his biography. Using information from the table, complete the biography. (The first gap has been completed for you, as an example.) Class discussion
• Is a biography written in a particular order of events?
• Which is the most common tense?

20 years from now, one of your class-mates becomes a famous sport-star. You have been asked to write his/her biography. Collect the necessary biographical details. Use your imagination to create his / her achievements in the sport concerned, and write the biography. Remember to write it in chronological order of events, and use the simple past tense as far as possible.

Using CBSE Class 9 solutions Grandmaster Koneru Humpy Queen of 64 Squares exercise by students are an easy way to prepare for the exams, as they involve solutions arranged chapter-wise also page wise. The questions involved in CBSE Solutions are important questions that can be asked in the final exam. Maximum students of CBSE Class 9 prefer CBSE Textbook Solutions to score more in exam.

Get the free view of chapter 7 Grandmaster Koneru Humpy Queen of 64 Squares Class 9 extra questions for English Course Communicative: Main Course Book Interact in English - Class 9 and can use Shaalaa.com to keep it handy for your exam preparation