Look at the picture below and list some phrases and words that come to your mind when you look at it. 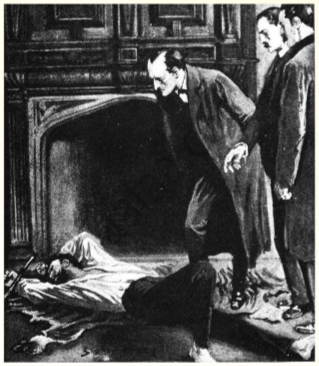 Can you make some guesses about the dead man? Give reasons for your answers.
a) Did the man die a natural death or was he murdered?
b) Was the dead man rich or poor?
c) Who is the man bending over him?

Here are a police constable's notes or his investigation or the murder at Manor House. After reading the notes, discuss where the murder could have taken place. What was the motive behind the evil act? How was the act committed?

Dr. Wood, the capable general practitioner, has been requested to solve this case. He gathers information about the murder from the inmates or the house. The information is presented in two parts.

The village of Birlstone is a small and very ancient cluster of half-timbered cottages on the northern border of the county of Sussex. For centuries it had remained unchanged but its picturesque appearance has attracted well-to-do residents. A number of small shops have come into being to meet the wants of the increased population.

About half a mile from the town, standing in an old park famous for its huge beech trees, was the ancient Manor House, with its many gables and its small diamond paned windows. The only approach to the house was over a drawbridge, the chains and windlass of which had been rusted and broken. The family consisted of only two individuals - John Douglas and his wife. Douglas was cheery and genial to all and had acquired great popularity among the villagers. He appeared to have plenty of money. Thus, it came about that John Douglas had, within five years, won himself quite a reputation in Birlstone. His wife was a beautiful woman, tall, dark and slender, younger than her husband; a disparity which seemed in no way to mar the contentment of their family life. It was remarked sometimes, that the confidence between the two did not appear to be complete. There were signs sometimes of some nerve strain upon the part of Mrs. Douglas.
Cecil Barker, was a frequent and welcome visitor at Manor House, Barker was an easy going, free handed gentleman.
It was on Jan 6th at 11:45 that the alarm reached the small local police station that John Douglas had been murdered. Dr. Wood seemed to be unnerved and troubled.

Part B
Conversation between Dr. Wood and Cecil Barker

Dr. Wood : We will touch nothing until my superiors arrive. {He spoke in a hushed voice, stating at the dreadful head)
C.Barker : Nothing has been touched untilnow.
Dr. Wood : When did this happen?
C.Barker : It was just half-past eleven. I was sitting by the fire in my bedroom when I heard the gun shot. In thirty seconds I was in the room.
Dr. Wood : Wasthedooropen?
C.Barker : Yes, it was open. Poor Douglas was lying as you see him.
Dr. Wood : Did you see anyone?
C. Barker : No, I heard Mrs. Douglas coming down the stains behind me, and I rushed out 1 to prevent her from seeing this dreadful sight.
Dr. Wood : But I have heard that the drawbridge is kept up all night.
C. Barker : Yee,it was up until l lowered it.
Dr. Wood : Then how could any murderer have got away? It ls out of question! Mr Douglas must have shot himself.
C. Barker : That was our first idea. But see! The diamond paned window is open to its full extent.
Dr. Wood : I think someone stood there while trying to get out.
C. Barker : You mean that someone waded across the moat?
Dr. Wood : Exactly!
C. Barker : I agree with you.
Dr. Wood : But what I ask you ls, how did he even get into the house at all if the bridge was up?
C. Barker : Ah, that's the question.
Dr. Wood : At what time was the bridge raised?
C. Barker : It was nearly 6 O'clock.
Dr. Wood : Then it comes to this, if anyone came from outside -if they did-they must have got in across the bridge before six and had been in hiding ever since. The man was waiting. He shot him, when he got the chance.

In Question 3, you read an eye-witness account of a robbery. On the basis of your reading of the Birlstone tragedy, in about 125 words, write Dr Wood's account of the discovery of John Douglas's body.

Using CBSE Class 9 solutions The Tragedy of Birlstone exercise by students are an easy way to prepare for the exams, as they involve solutions arranged chapter-wise also page wise. The questions involved in CBSE Solutions are important questions that can be asked in the final exam. Maximum students of CBSE Class 9 prefer CBSE Textbook Solutions to score more in exam.

Get the free view of chapter 5 The Tragedy of Birlstone Class 9 extra questions for English Course Communicative: Main Course Book Interact in English - Class 9 and can use Shaalaa.com to keep it handy for your exam preparation