What is your opinion about 'Animals behind bars'? Share your views with the class.

Read through the poem and quickly make a note of any thoughts that come to you, while you are reading it.

Dispute
A man and a tiger once had a dispute,
Which was reckoned greater, the man or the brute.
The tiger discoursed on his side at some length,
And greatly enlarged on his courage and strength,
Said the man, 'Don't be prating; look yonder, I pray,
At that sculpture of marble: now what will you say?
The tiger is vanquished; but as for the man,
He is striding upon him: deny if you can.'
'But pray,' said the tiger, 'Who sculptured that stone?
'One of us,' said the man. 'I must candidly own.'
'But when we are sculptors,' the other replied,
'You will then on the man see the tiger astride.'
Anonymous

Answer the following question by ticking the correct option :
What was the cause of the dispute between the tiger and the man?

Answer the following question by ticking the correct option :
What did the man do to prove his point?

Answer the following question by ticking the correct option :
What was the tiger's counter-argument?

In pairs discuss the qualities and characteristics of the tiger and man. Complete the web charts. 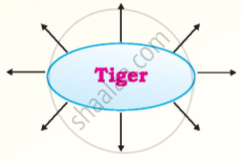 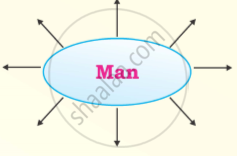 Working in groups of four, write a dialogue between
• A tiger behind bars and a man
• A man in a cage and a tiger.

Listen to the extract on Tigers read by teacher/ student which is given below , and as you listen, complete the summary given below.

Save Tigers
The price of human greed is being paid by yet another animal species the Tiger. Today the tiger population is getting depleted at an alarming rate. According to a recent survey, one tiger is being poached everyday. If the present state of affairs is allowed to continue, the next generation will not get to see the majestic animal even in the zoo.
It is high time that action is taken to protect and conserve the tigers in order to maintain the ecological balance. Stringent laws against poachers must be enforced. It is over 40 years since the tigers became our national animal. As a result, the species was to be protected. Ironically, they are closer to extinction now than ever before. Children, scientists, conservationists, NGOs and institutions in India and world wide have put their heart and soul into trying to save the tiger. Yet there is little we all have been able to do. The responsibility and the power of protection lies with the government, specifically the forest department.
Let us not forget that if we destroy nature, ultimately we will be destroyed ourselves.
Tiger, an apex predator is an indicator of our ecosystem's health. Saving the tiger means we save the forest, since tiger cannot live in places where trees have vanished, and in turn secure food and water for all.
Tigers are now an endangered species. Today there are about 5000 to 7,400 left in the world. Three types of tigers - The Bali, Javan and Caspian tigers have become extinct. The two reasons why tigers are endangered are: Habitat loss and illegal killing.
Illegal Killing
One of the most concerning threat to our national animal that needs to be recognised is poaching. Tigers are killed to make rugs and coats out of their skins.
In many Asian cultures medicines made from tiger's body organs are believed to cure diseases.

Project Tiger
Project Tiger is a wildlife conservation project initiated in India in 1972 to protect the Bengal Tigers. It was launched on April 1, 1973 and has become one of the most successful wild life conservation ventures. The project aims at Tiger conservation in specially constituted Tiger reserves representative of various bio geographical regions through out India. It strives to maintain a viable conservation based on tiger population in their natural environment.
Project Tiger was Indira Gandhi's pet project. The main achievements of this project are excellent recovery of the habitat and consequent increase in the tiger population in the reserve areas, from a mere 268 in 7 reserves in 1972 to above one thousand in 28 reserves in 2006.
Tigers being at the apex of the food chain can be considered as the indicator of the integrity of the ecosystem. They can be found in a wide range of habitats, from the evergreen and monsoon forests of the Inda-Malayan realm to the mixed coniferous - deciduous woodlands of the Far east Russia and the mangrove swamps of the Sundarbans, shared by India and Bangladesh.
Tigers are mostly nocturnal but in the northern part of its range, the Siberian subspecies may also be active during the day at winter-time. All wild tigers live in Asia, others live in the humid jungles of Sumatra. The body length is 140 - 280 cm and the tail length is 60 to 95 cm. The upper part of the animal ranges from reddish orange to ochre and the under parts all whitish. The body has a series of black stripes of black to dark grey colour.

Fill in the blanks :

Read the information given below.
Do you know that tigers are the biggest cats in the world? There are five different kinds or sub-species of tigers alive in the world today. Tigers are called Panthera tigris in Latin, Bagh in Hindi & Bengali, Kaduva in Malayalam & Pedda Puli in Telugu.
Total Population of Tigers in the world

Tiger in Trouble
Since some tiger parts are used in traditional medicine, the tiger is in danger. Apart from its head being used as a trophy to decorate walls, tigers are also hunted for the following.
Head : As a trophy on the wall.
Brain: To cure laziness and pimples.
Teeth: For rabies, asthma and sores.
Blood: For strengthening the constitution and will power.
Fat: For vomiting, dog bites, bleeding haemorrhoids and scalp ailments in children.
Skin: To treat mental illness and to make fur coats.
Whiskers: For toothache.

After reading the information given in Question 8, complete the table given below by filling in the blank spaces.

Massive poaching in the past two years has wiped out the entire tiger population at one of the tiger reserves in India,' claims an investigation report.
Study the information in 7 and 8 and notice how the number of tigers are falling. Using the information, write a paragraph in about 150 words on Project Tiger.

Using CBSE Class 9 solutions Save the Tiger exercise by students are an easy way to prepare for the exams, as they involve solutions arranged chapter-wise also page wise. The questions involved in CBSE Solutions are important questions that can be asked in the final exam. Maximum students of CBSE Class 9 prefer CBSE Textbook Solutions to score more in exam.

Get the free view of chapter 3 Save the Tiger Class 9 extra questions for English Course Communicative: Main Course Book Interact in English - Class 9 and can use Shaalaa.com to keep it handy for your exam preparation