Teacher/ Student to read out the first part given . After you listen, answer the following questions :

Nuclear war has broken out in Europe. A school in England has been evacuated by airplane to an unknown destination. While flying over a tropical region, the plane is shot down and it bursts into flames , but the body of the plane containing the passengers falls to earth safely. A few boys (Ralph, Jack, Roger, Simon, Piggy and others) manage to scramble out. They have landed on an unnamed island which has coral reefs, beaches, caves and fruit trees. The novel tells their story.

Imagine that you are one of the boys, and that the map on the next page is of the island on which you have landed. Your most urgent task is to decide where to live. Work in groups of four; decide where to set up camp, and the materials you will use. Be prepared to justify your choices to the rest of the class.

The last part of the extract that you have just heard is given below. Notice 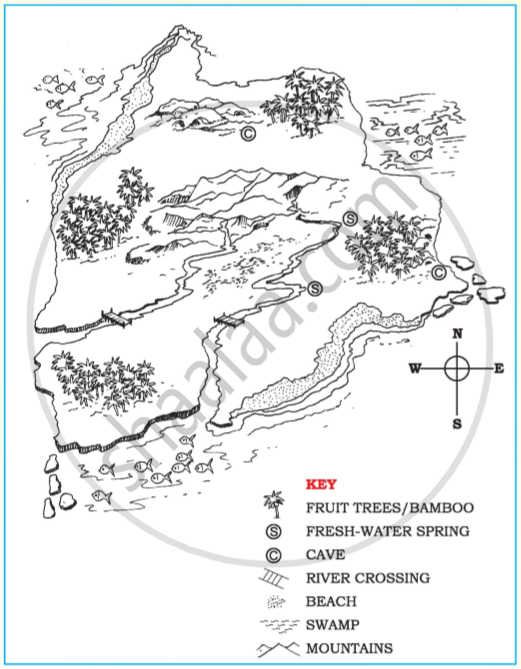 how the author creates interest through a step-by-step organisation of his ideas.

The next part of the story has been given below. Punctuate it, remember to use quotation marks (" ")when people speak.
they were dressed strangely in eccentric clothing shorts shirts and different garments they carried in their hands their bodies from throat to ankle were hidden by black cloaks the boy who controlled them came forward vaulted on to the platform with his cloak flying and peered into what was almost complete darkness whereas the man with the trumpet ralph sensing his sun blindness answered him theres no man with a trumpet only me the boy came close and peered down at ralph screwing up his face as he did so he turned quickly isnt there a ship then he was tall thin and bony his face was crumpled and freckled out of his face stared two light blue eyes frustrated now and turning or ready to turn to anger isnt there a man here ralph spoke to his back no we are having a meeting come and join us

Imagine that you are on an uninhabited island with a group of children of your age. In groups of four, discuss and enumerate the strategies that will be adopted by you to survive. You can think on the following lines :

Imagine that you have just returned from Topo Island. The Editor of a local newspaper has asked you to write about your adventure. Write the article.
Some hints :
1) Very briefly, describe how you landed on the island, and the main features of the island.
2) Write about where you set up camp, describe one main adventure, and how you were eventually rescued.
3) Make the adventure part of your story exciting, with lots of action.
4) Include dialogue in the adventure part.
5) Try to create mystery and suspense, as in B.3.
6) Finally, give your adventure story a suitable heading.
7) Your story must be written in paragraphs and should carry your By line.

Look at the map of Topo Island in B.2 and read the notes given below. Then complete the tourist brochure.
Notes

Using CBSE Class 9 solutions The Sound of the Shell exercise by students are an easy way to prepare for the exams, as they involve solutions arranged chapter-wise also page wise. The questions involved in CBSE Solutions are important questions that can be asked in the final exam. Maximum students of CBSE Class 9 prefer CBSE Textbook Solutions to score more in exam.

Get the free view of chapter 2 The Sound of the Shell Class 9 extra questions for English Course Communicative: Main Course Book Interact in English - Class 9 and can use Shaalaa.com to keep it handy for your exam preparation