Read the following passage on New Zealand.
New Zealand is a Mecca for nature lovers. Throughout most of New Zealand's geological history, it was a bird's paradise. The islands were once part of the southern super - continent Gondwana from which they broke off around 80 million years ago before mammals had evolved and spread.

The underlined words express a relationship usually of space or time between the words with which they stand. Such 'Positional' words which are used before nouns (pre-position) are called prepositions. 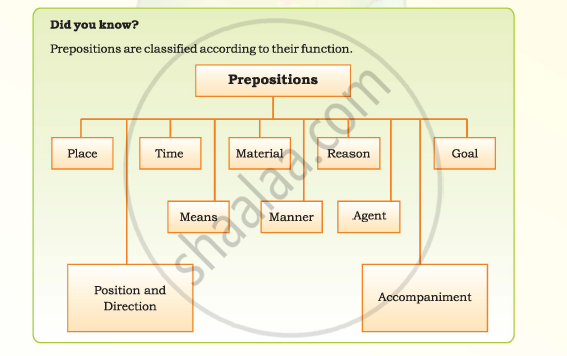 Identify the functions of the prepositions in each of these sentences.

1. George Washington served as the Commander-in-Chief during the
American Revolutionary War.
2. The assassin shot the leader with a gun.
3. Pratap bequeathed his property to charity.
4. Manoj was awarded a certificate for his good conduct.
5. The roof is covered with fire-proof sheets.

Fill in the blanks with suitable prepositions.

Group the prepositions in the box below to indicate their use as prepositions of place (P), movement (M) or time (T). There may be more than one category for each.

A student from a lower class asks you to help her illustrate for her class, the use of different prepositions.

In groups of four, choose one of the following lists of prepositions and draw simple pictures to illustrate their meaning.

Prepositions of Location
Picture Dictation
Work in pairs - Student A and Student B. Student A only (picture given below) - . Keep the picture secret from Student B. Describe exactly what you see to Student B, who must draw the picture from the information given. At the end, compare the two pictures. Draw your picture in the box below. 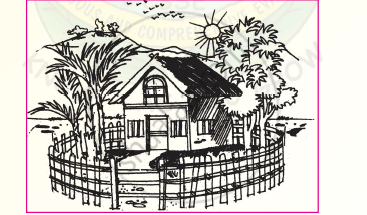 e.g.
In the middle there’s a small house. Behind the house there are two hills. Several birds are flying over the house…

This description is taken from a well-known film. Can you guess which one?

A man in a red cape and blue tights is flying over a city. On his chest is the letter S. Below him a large crowd is pointing up at him.

Imagine a scene from a play, film or TV show you have seen.

Describe (a) where things and people are, and (b) any movement. Follow the example.

Study the map and the key given below carefully, and complete the sentences that follow. 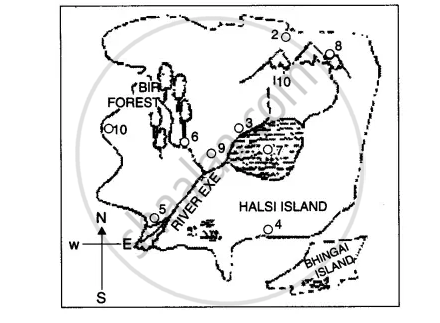 (b) Now describe the position of the other eight places, using some of the words in
the box.

Look at the map below.
You have invited three friends to a party at your house. Write three separate notes, giving them directions from 1, 2 and 3 to your house. You may use the words in the box. 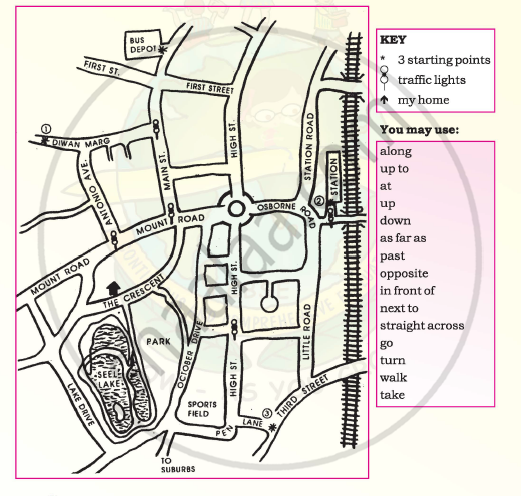 The directions from (1) are given here as an example

Work in pairs. Put one pencil on a point on the map where you live, and put another pencil on any other point. Ask your partner to tell the direction for getting to your house.

You have recently been to a wedding. A British pen friend asks you to describe it. Using the words in the box, describe the different stages. Write only the body of the letter below.

Link the words from the different columns to produce meaningful sentences. One has been completed as an example. If you wish, write out the correct sentences in your notebook.

Fill in the gaps with suitable prepositions

Adjectives and Prepositions
Look at the table below. Decide which of the adjectives in Column A commonly go with which preposition. Tick the table as shown. (There may be more then one tick for each adjective).

Use the adjectives and prepositions from the box above to fill in the gaps below. Add eight sentences of your own.

Think of a person in your class, and use adjective + prepositions to describe him/her in about two or three sentences. Don't give a name.

Show your description to your partner. Let her or him guess who it is.
(b) The following diagram explains the use of some of these prepositions.

Notice the following peculiarities in the use of Prepositions.
1) at relates to a small extent of space or time while in relates to a wider extent.
2) with relates to the instrument used for doing something.
by relates to the doer
e.g. (1) This poem was composed~me
(2) I wrote with a Shaffer's pen.
3) between, among: between is used when there are two things or persons or
ideas, among is used for more than two.
e.g. ( 1) The property was divided between the twins.
(2) The gossip spread among the villagers.
4) beside, besides : beside means by the side of, besides means in addition to
e.g. (1) Ram sat beside his grandmother.
(2) Besides music, he is interested in painting.
5) in and within : in denotes at the close of some future period, within denotes
sometime short of the close
e.g. (1) The project will be implemented in a week's time.(= at the close)
(2) The plan will be sanctioned within a fort night(= less than)

CBSE solutions for Class 9 English Communicative - Workbook Interact in English chapter 8 (Prepositions) include all questions with solution and detail explanation. This will clear students doubts about any question and improve application skills while preparing for board exams. The detailed, step-by-step solutions will help you understand the concepts better and clear your confusions, if any. Shaalaa.com has the CBSE Class 9 English Communicative - Workbook Interact in English solutions in a manner that help students grasp basic concepts better and faster.

Using CBSE Class 9 solutions Prepositions exercise by students are an easy way to prepare for the exams, as they involve solutions arranged chapter-wise also page wise. The questions involved in CBSE Solutions are important questions that can be asked in the final exam. Maximum students of CBSE Class 9 prefer CBSE Textbook Solutions to score more in exam.

Get the free view of chapter 8 Prepositions Class 9 extra questions for Class 9 English Communicative - Workbook Interact in English and can use Shaalaa.com to keep it handy for your exam preparation