Here is a newspaper report of a young girl who went back in time to see how her home town looked seventy years ago.

It is reported that Kareena, a twelve year old girl living in Purkul, went back in time using a time machine.

Seventy years ago her home town was an ideal place to live in. Her home town had not been invaded by the marvels of technology. Industries had not been set up then, so the air was not polluted. She could see children playing in the garden. Some children were listening to the stories told by their grandmothers. Happiness and contentment prevailed everywhere.

In the newspaper report above, the focus is on the changes as observed by Kareena.
VIEW SOLUTION
Exercise | Q 2 | Page 75

Fill in the table to identify the subject, verb and object in the sentences listed above. You may include the object/agent where necessary.

Did you know?
A passive construction does two things.
(i) it brings the object to the position of the subject.
(ii) it introduces the verb be and the past participle form of the verb. (-ed/ -en)
A passive construction is be used when
(a) the agent is unknown
e.g. Gold jewellery worth one crore was found missing.
(b) the agent is too obvious
e.g. The speeding car was stopped at the signal for violating the traffic rules.
(c) the process is more important than the doer.
e.g. Vanilla flavour is added to the milkshake.
(d) the speaker wants to hide the source for confidentiality.
e.g. I was informed that the staff accept gifts from the customers.

Present Passive: “Where are they made?”

Match the words from columns A, B, C, and D to produce factually correct sentences. Write your answer in full sentences. (Remember to make your subject and verb “agree”.)

e.g. Coffee is grown in Brazil.

“Where was it made?”

Look at what your partner is wearing. Imagine where the various items of clothing were (or might have been) made, and tell your partner. Use your imagination!

Passives in Headlines and Notices
Headlines.
Newspaper headlines are short and crisp. They often use the passive as it may
not be necessary to focus on the doer.

Expand the following headlines using passives as shown.
a) Oscar award for A.R. Rahman's Jai Ho
A.R. Rahman was awarded the Oscar for his song Jai Ho in the movie Slumdog
Millionaire.

. Change them into active (voice) and explain their meaning.
e.g. All credit cards accepted.
We accept credit cards.
Meaning: The organization accepts credit cards from customers for all their transactions. 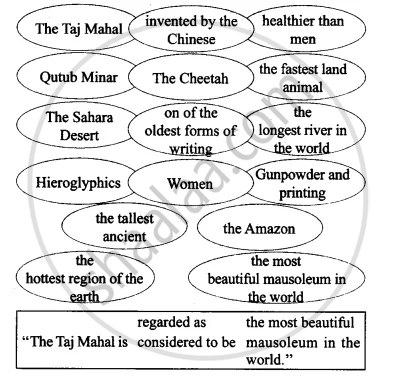 At a party, Gautam met a friend (Ravi) who talked about his experiences in staging a play.

Gautam : It’s quite some time since we met. I guess it’s because you’ve been busy as usual.
Ravi : Yes, I’ve been directing a play – Tagore’s Chandalika. Did you hear about it?
Gautam : Yes, I heard it was a great hit. In fact, I was planning to get in touch with you to ask for your help, to put on a play for our Annual Open Day. How did you go about staging your play?
Ravi : Well …. First, we chose three possible plays, and divided ourselves into reading groups. Then we exchanged views and arrived at a decision.
Gautam : What was your next step?
Ravi : Casting, of course. Once we’d got the script ready, we selected the cast.
Gautam : And then?
Ravi : We held auditions for the main parts and then made a preliminary selection. Eventually we were able to make a final choice and assign the roles.
Gautam : How did you plan your rehearsals?
Ravi : We met for a couple of hours every evening. As the play took shape, we held longer and more intensive rehearsals.
Gautam : Who else was involved in the production?
Ravi : The stage crew and the technicians. But they didn’t come in until we were out of the initial phase.

(The conversation continues.)
Gautam decides to make a written record of how Ravi produced a play in order to try it too.

Write this record, using the passive where appropriate. The first few words have been provided for you.

Inspector Narayan has been called to investigate a burglary. When he arrives, there is total chaos in the room. He makes notes about what has been damaged. You are Inspector Narayan. Look at the picture and complete the description, using the Present Perfect Passive. Maintaining a Point of view
(a) Read the following passage. Underline the verbs in the active voice and put circles around verbs in the passive voice. The first two have been completed.

Dr. Godbole arrived at the station at 6.30 pm and (was met) by Professor Salisbury of the Institute of Environmental Studies. After being driven to the Conference Centre for a brief meeting, the Indian forestry expert was taken to his hotel. The following morning, he presented his paper entitled “Save the trees — Save the world” which was greeted with prolonged applause. After his brief visit, Dr. Godbole is reported to have said he was very pleased with its outcome.

(b) From whose perspective or point of view is this description given? How does the use of the passive voice help maintain this?

Review of passives
Look back on the exercises in this Unit. Discuss why the passive is used in each of these different circumstances.
Can you think of any other times when it is best to use the passive?

Imagine you are a famous person. Write a brief report (maximum 80 words) of a day in your life. Use the passive voice where you think it is appropriate. An example of how you might start is given below.

Future passive
Promises Galore!
Your class will be divided into two groups. One member of each group is contesting an election representing his/her party. The two parties are United Students’ Front and United Youth Power. The group writes the election manifesto stating changes that will be brought about in schools and colleges if their candidate is selected.
Begin like this:
If I am elected, the following changes will be implemented with immediate effect.

Prevention is better than cure.
Swine flu has been declared (as) a pandemic.
In groups of four discuss the following.

(a) What has been done by the authorities to cope with the problem?
(b) What are the consequences of such a major world-wide infection?

Write out the answer to the questions as a flowchart using the passive form of the verb.

CBSE solutions for Class 9 English Communicative - Workbook Interact in English chapter 6 (The Passive) include all questions with solution and detail explanation. This will clear students doubts about any question and improve application skills while preparing for board exams. The detailed, step-by-step solutions will help you understand the concepts better and clear your confusions, if any. Shaalaa.com has the CBSE Class 9 English Communicative - Workbook Interact in English solutions in a manner that help students grasp basic concepts better and faster.

Using CBSE Class 9 solutions The Passive exercise by students are an easy way to prepare for the exams, as they involve solutions arranged chapter-wise also page wise. The questions involved in CBSE Solutions are important questions that can be asked in the final exam. Maximum students of CBSE Class 9 prefer CBSE Textbook Solutions to score more in exam.

Get the free view of chapter 6 The Passive Class 9 extra questions for Class 9 English Communicative - Workbook Interact in English and can use Shaalaa.com to keep it handy for your exam preparation