Simple Past and Past Perfect
Complete this story by Julius Lester. Choose the correct forms of the words
given in the brackets.

Answer the following questions based on the story you have read.
(a) What had Brer Rabbit found out?
(b) What did he do when the plants grew?
(c) How did he enter Brer Fox's peanut patch?
(d) Brer Fox had an idea of who was stealing from his patch. What did he do to trap
Brer Rabbit?

You must have used the simple past tense and past perfect tense in your
answer. Do you know most often, when you use the past perfect, you use it with
the (simple) past?
Study the sentences from the story and write whether (a) the action happened
before the action mentioned in the simple past tense, or (b) an action happened
after the action mentioned in the past perfect tense.
(e.g.) Brer Rabbit had decided _(a)_ gardening was _(b)_too much for him. So,
he went __ back to his old ways. Earlier, he had made __ a tour through
the community to see what everybody had been __ planting that summer
and his eye was __ caught by Brer Fox's peanut patch.

Here is a news story about how crops are saved by climate-proofing them Complete it by choosing the right words from those given in the brackets.

(B). Answer the questions based on your reading of the passage above.
(a) What have been the most worrying aspects of agricultural growth?
(b) What do scientists today focus on?

(c) Where is the negative impact of climate most felt?
(d) What have the scientists focussed on so far?
(e) How has their attention shifted?

(C) Did you know
You would have used the simple present and present perfect tense in your
answer. Why?
The main use of the simple present tense is to refer to
(i) an action that takes place now.
(ii) routine action/ s.
The present perfect tense is used to refer to an action which has happened
in the past but whose effect still remains.
(e.g.) Among the most worrying aspect of climate change is the effect it has on
the world's food supply.
Climate scientists have predicted that the cultivation of rice in Asia and SubSahara
Africa has been affected severely, since 1970. But, today lack of funds
hinders research.

(A) Working in pairs, fill up the table by asking your partner about what he/ she does on the following days and times.

(B) Write a brief account of his/her actions on the specified times and days, in the
space below. Ask further questions, if necessary. Use the simple past/past
perfect tense to write your description.
e.g. (a) Rani visited the zoo on Sunday.
(b) She had.finished all her homework by 5. 00 am on that day.

Present Continuous
Look around your classroom and observe the activities in your school in this
period. Describe what you, your teacher or class are doing in the form of a
paragraph.
e.g. The Blue House is practising its songs for the competition. I can hear the band
which is playing patriotic tunes, in the playground.

Simple Past and Past Continuous
There was a burglary in your neighbourhood. You saw something suspicious.
Tell the police officer all about it by filling in the blanks choosing the correct
forms of the words from the options given below.

Past Continuous
A young girl was kidnapped from the main street of Srutipur at 3 o’clock yesterday afternoon. Chetan was there at that time. 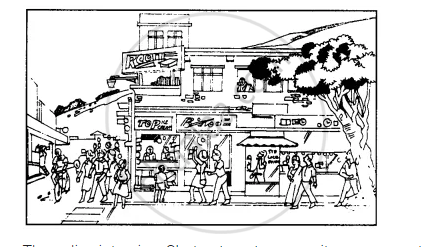 1. “I can’t concentrate on my work because I’m thinking about that beautiful scene.”
2. “I think it is beautiful.”

Put a tick (✓) or cross (✗) against each sentence according to whether it is correct or incorrect.

Now, work individually, and with the help of the information in the box below, write six appropriate sentences.

‘Since’or‘For’
We often use the Present Perfect with time expressions using ‘since’ or ‘for’.
Which expressions go with since and which go with for? (Indicate with a tick). (The first two have been done for you.)

Choose three ‘since’ expressions and three ‘for’ expressions from the table above. Then write six sentences using the pattern in the box below.

I haven’t seen him since the day before yesterday.
I have not seen him for ages.

Work individually, and note down some events that occurred recently in your school or local area in the same way as the example in (a). Write a short report about it in the space given below.
_________________________________________
Exchange notes with your partner. Read out your partner’s information as a news broad¬cast. Use the present perfect tense to report I express actions completed in the recent past but whose effect still remains.

Use your imagination to make the news item sound exciting

Present Perfect Continuous
“What have you been doing?”
Imagine what people have been doing or what are the things that have been happening.

Now write three situations similar to (a) in the box. Exchange the information with your partner and guess the answer to each other's situations as in (b).

Question 1.
My dog is barking angrily and is trying to get loose.

Question 2.
The car is making a curious noise. 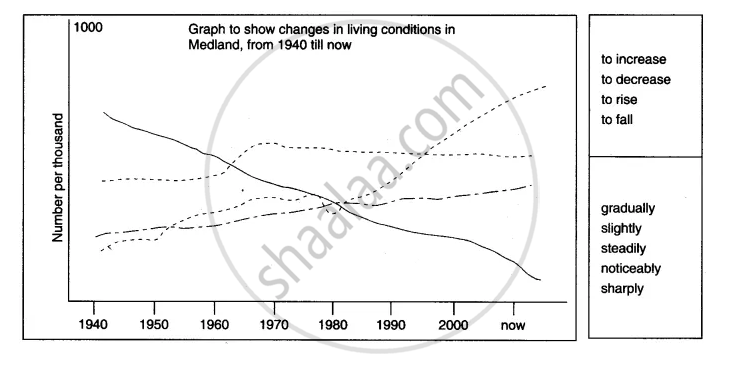 “Living conditions have been improving….”

Write a report on the changes in living conditions in Medland between 1950 and now. Suggest reasons for these changes. Use the present perfect continuous where necessary. You may wish to use the words in the vertical box above right.

(а) Over the years since 1950 the number of children in secondary schools has been increasing noticeably. This is possibly because the Government has been building more schools.
(b) The number of homes with running water has been rising sharply since 1985, whereas
VIEW SOLUTION
Exercise | Q 14 | Page 13

Used to and Would
(A) Read the passage given below. Substitute ‘used to’ with ‘would’ wherever appropriate so that the passage reads better.

Could you replace ‘used to’ with ‘would’ in every instance?
No. This is because they are used differently.

Read the passage again and complete the sentences below.

(B) Think of the days when you were eight years old. Write down four or five things you would do or used to do or be. Make sentences like those in the box. Share your experiences with your partner.

The tense forms that have been practised and discussed in this chapter, allow
you to show accurately and subtly the time and the relationship of actions and
events with it. We use them in speech and writing.

Understanding and recognising how the tense forms are used.

Present Continuous
1. I am playing tennis
2. You are reading well
3. She is looking at something.

Present Perfect Continuous
Read the following sentences with the present perfect continuous tense
form
1. Mr and Mrs Singh have been living in the same house in the same town
for the last five years.
2. "Have you beenkeepingyourpocketmoneysafely, Rani?"
These sentences illustrate the main use of the Present Perfect Continuous
tense to show that the action started in the past and is still in progress in
the present.

Subject Verb Agreement.
A verb must be in the same number and person as its subject e.g.
(a) A man and his wife have lived here since January 2009.
(b) Arun, a great scholar, is dead.
(c) Either James or Peter is to be promoted.
( d) The horse as well as its rider was hurt by the fall.
(e) Not only India, but also the whole world recognises Gandhiji's
achievements

(f) Eachman was rewarded.
(g) Every tree has been saved.
(h) The Adventures of Tom Jones is a great novel.

Edit the following letter by choosing the appropriate word for each underlined word from the given options.

The Principal
National Public School
Bilaspur
Madam
Our school (a) conducted a cultural fiesta on the 26th of this month. The events
for competition (b) includes music, dance and skit. Each school (c) are
requested to send not more than fifteen participants. We would appreciate if
the students of your prestigious institution (d) are participating in the
competition and make our show a grand success. Attractive prizes will be
awarded to the winners.
Thank you very much
Yours sincerely
Gayathri Sundaram
Principal

Complete the following news item by choosing the correct word from the options given below.

CBSE solutions for Class 9 English Communicative - Workbook Interact in English chapter 1 (Verb Forms) include all questions with solution and detail explanation. This will clear students doubts about any question and improve application skills while preparing for board exams. The detailed, step-by-step solutions will help you understand the concepts better and clear your confusions, if any. Shaalaa.com has the CBSE Class 9 English Communicative - Workbook Interact in English solutions in a manner that help students grasp basic concepts better and faster.

Using CBSE Class 9 solutions Verb Forms exercise by students are an easy way to prepare for the exams, as they involve solutions arranged chapter-wise also page wise. The questions involved in CBSE Solutions are important questions that can be asked in the final exam. Maximum students of CBSE Class 9 prefer CBSE Textbook Solutions to score more in exam.

Get the free view of chapter 1 Verb Forms Class 9 extra questions for Class 9 English Communicative - Workbook Interact in English and can use Shaalaa.com to keep it handy for your exam preparation