Do you know when hockey was first played? Research in Ethiopia has discovered that it has been around for more than four millenia. A tablet in Greece has images of young people playing field hockey. Even in South America, Ireland, Egypt, Scotland and Rome, there are proofs and records of this game. The game in these countries was no different than the other even though it was known by different names. Hundreds of years ago, this game was known as 'Hockie' in Ireland and it is this name that has stuck with the game ever since. While current field hockey appeared in the mid-18th century in England, primarily in schools, it was not until the first half of the 19th century that it became firmly established. Prior to 1980, women were not permitted to take part in this game. The first club was created in 1849 at Blackheath in south-east London. During the 1600s and 1700s, hockey in England was a little dissimilar and it was more disorganised. People from all over the village would take part in the game. It was not unusual for a team to have 60 - 100 players. It was the goal of the team players to get the ball into the common ground of the rival team. This game required quite a few days to finish. Many players suffered injuries. Even though umpires were present, they were not allowed to say anything without the team members' request.

Ultimaty , good judgment prevailed. Firm regulations were introduced. In England, a headmaster restricted the number of players to thirty for one single team, During the 1860s, England's Eton College laid down some rules for the game. Additional rules were introduced afterthe formation of the Hockey Association in the year 1875.

Football refers to a number of similar team sports, all of which involve (to varying degrees) kicking a ball with the foot in an attempt to score a goal. People from around the world have played games which involved kicking and / or canying a ball, since ancient times. However, most of the modern codes of football have their origins in England. 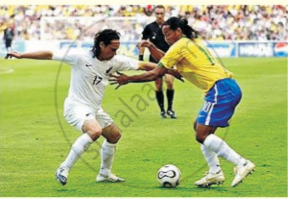 The most popular of these sports worldwide is association football, more comm.only known as just 'Football' or 'Soccer'. It is widely considered to be the most popular sport in the world

The game was first played during the Olympics in the year 1908. At present, all the countries have hockey teams that participate in The World Cup, the Champion's Trophy and of course, the Olympics. Field hockey is the national sport of India and Pakistan.
Hockey is one of the sports in which two teams play against each other by trying to manoeuvre a ball, or a hard, round, rubber or heavy plastic disc called a puck, into the opponents' net or goal, using a hockey stick. An official handle tape hockey ball is spherical, with a circumference of between 224 and 235 millimetres. It should weigh between 156 and 163 grams. It may be made of any material, but should be hard, smooth and white in colour.  Modern field hockey sticks are J-shaped and constructed of a composite of wood, glass fibre or carbon fibre (sometimes both) and have a curved hook at the playing end, a flat surface on the playing side and curved surface on the rear side. 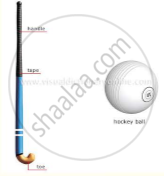 Now the game is played between two teams. Each team consists of 11 players including the goal keeper. In the beginning, the captains of both the teams toss for the choice of ends. The duration of the game is divided into two periods of thirty -five minutes each with a break in between. At half time the team will change their ends.
The hockey playground is rectangular in shape. It is 100 yards long and 60 yards wide. The longer boundary lines are called the side lines and the shorter ones are called goal lines. All lines are three inches wide throughout. At each end is a goal 2.14 m high and 3.66m wide and an approximately semi circular area 14.63m from the goal, known as the shooting circle or 'D' or penalty area. A spot 0.15m in diameter, called the penalty spot is placed inside the 'D'.

The game starts when the umpire blows his whistle for the opening pass-back. The passback is made at the centre of the field to start the game (also after half- time and after each goal is scored). The ball, which may be pushed or hit, must not be directed over the centre line. All players of the opposing team must stand at least 5 yard from the ball and all players of both teams, other than the player making the pass-back must be in their own half of the field.

There are two umpires to control the game and to administer the rules. These umpires are the sole judges of the game. The umpires are responsible for keeping time for the duration of the game.
Penalties -A free hit is awarded for any foul committed outside the penalty area or when the ball is hit out of the playing area. A penalty corner is awarded if, within the penalty area, a foul is committed or the ball is hit outside his goal-line. A penalty stroke is given when foul is intentionally committed in the circle. It is hit from the penalty spot with only the goal keeper defending the goalpost. Cards are shown for rough or dangerous play, misconduct or intentional offences. The umpire will issue an official warning to a player by showing the green card. Prior to that, the player would probably have been given a verbal caution. A yellow card means the player will be off the pitch for five minutes or more. A red card is given for more serious offences and sees the player leave the match for good.
Each team is permitted to substitute any number of players during the game. A player who has been substituted may re-enter the field of play as a substitute for another player. The goal keeper is permitted to use pads, kickers, gauntlet, gloves and masks, body protection, elbow pads and headgear which is a full helmet incorporating fixed full face protection and cover for all of the head including back.
Football
It is a team sport played between two teams of eleven players, each using a spherical ball which is a round, leather-covered, inflated rubber bladder 27-28 inches in circumference and 397 -454 grams in weight. 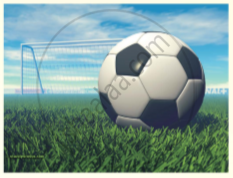 The game is played within a clearly defined area on a rectangular grass or artificial turf with a goal in the centre of each of the short ends. The object of the game is to score by driving the ball into the opponent's goal. The goalkeepers are the only players allowed to use their hands or arms to propel the ball; the rest of the team usually use their feet to kick the ball into position, occasionally using their body or head to intercept a ball in midair. The only time the players are allowed to use their hands is in case of a throw in, when the ball has gone outside the side lines. The team that scores the most goals by the end of the match wins. If the score is tied at the end of the game, either a draw is declared or the game goes into extra-time and/ or a penalty shoot-out.
In a typical game play, players attempt to create goal scoring opportunities through individual control of the ball, such as by dribbling, passing the ball to a team-mate, and by taking shots at the goal, which is guarded by the opposing goalkeeper. Opposing players may try to regain control of the ball by intercepting a pass or through tackling the opponent in possession of the ball; however, physical contact between opponents is restricted. Football is generally a free-flowing game, with play stopping only when the ball has left the field of play or when the play is stopped by the referee.
Football takes place on a standard football field. All football fields, professional, college, and high school, are the same size and have the same basic markings. The length of the pitch for international adult matches is in the range of 100-110 m and the width is in the range of 64-75 m.
The longer boundruy lines are touchlines, while the shorter boundaries (on which the goals are placed) are goal lines. A rectangular goal is positioned at the middle of each goal line. Nets are usually placed behind the goal, but are not required by the Laws.
In front of each goal is an area known as the penalty area. This is a rectangular area, 40.2m wide and extending 16. Sm into the field where the goalkeeper operates.
A standard adult football match consists of two periods of 45 minutes each, known as halves. Each half runs continuously, meaning that the clock is not stopped when the ball is out of play. There is usually a 15-minute half-time break between halves. The end of the match is known as full-time. Anytime during the match, a team can substitute upto three players maximum.
The game is controlled by a referee who is the official timekeeper for the match, and may make an allowance for time lost through substitutions, injured players requiring attention, or other stoppages. There are also two linesmen who keep guard of the touchlines or sidelines, signalling when the ball crosses the boundary lines. The referee alone signals the end of the match.
Handling the ball deliberately, pushing or tripping an opponent, or hitting a player from behind are examples of fouls, punishable by a direct free kick or penalty kick depending on where the offence occurred. Other fouls are punishable by an indirect free kick.
The referee may punish a player's or substitute's misconduct by a caution (yellow card) or sending-off (red card). A player is given a yellow card is said to have been 'booked'.
Penalty Cards
• Yellow - Warning card for dangerous play. A second yellow card at the same game leads to a red card, and therefore to a sending-off.
• Red - Serious misconduct resulting in ejection from the game. If a player has been sent off, no substitute can be brought in his place.
VIEW SOLUTION
Exercise | Q 3 | Page 155

Each student will now complete his/her half of the following table (Hockey or Football), by adding information from the text each has read.

Either in groups or individually, make a power-point presentation on either of the two games. Incorporate points from the table above and any other interesting information I detail.

CBSE solutions for Class 9 English - Communicative chapter 7 (Hockey and Foodball) include all questions with solution and detail explanation. This will clear students doubts about any question and improve application skills while preparing for board exams. The detailed, step-by-step solutions will help you understand the concepts better and clear your confusions, if any. Shaalaa.com has the CBSE Class 9 English Course Communicative: Main Course Book Interact in English solutions in a manner that help students grasp basic concepts better and faster.

Using CBSE Class 9 solutions Hockey and Foodball exercise by students are an easy way to prepare for the exams, as they involve solutions arranged chapter-wise also page wise. The questions involved in CBSE Solutions are important questions that can be asked in the final exam. Maximum students of CBSE Class 9 prefer CBSE Textbook Solutions to score more in exam.

Get the free view of chapter 7 Hockey and Foodball Class 9 extra questions for English - Communicative and can use Shaalaa.com to keep it handy for your exam preparation