Given alongside are the pictures of two boys - Shravan Kumar and Narendra Kumar. (They are not related.) Working with a partner, look at their pictures and predict how each boys lives. Write your answer in points . 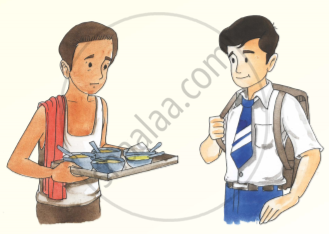 His day begins when most other people's day ends. Thirteen-year old Shravan Kumar works in a tea shop on Delhi's Bahadur Shah Zafar Marg, where several newspaper offices are situated. His work begins around seven in the evening when he starts preparing samosas, coffee and tea. He carries them to several offices, does the dishes, and goes around collecting his money well into the night. Around six in the morning, when all the newspapers are despatched for distribution and the press employees return home, he prepares his food, takes a bath and goes to bed.

Shravan is an orphan who crune to Delhi from his village in search of work. His father kept a shop, but was tricked out of it by a deceitful uncle. Despair drove him to alcohol and grunbling, and he died of a stroke soon after.

Shravan worked in a tea shop in his village for a while. "When I first began washing other people's cups and glasses", he recalls, "I used to feel very bad, I would cry."
Shravan moved to the more lucrative environs of Delhi, where his elder brother Shatrughan had preceded him. Ajob in a shop selling ice was his first taste of big city life. His mother crune to visit him in Delhi, but she fell ill and died soon after. "That was two or three years ago. I don't remember exactly when," the little boy says. Soon, Shravan lost his first job. His employer still owes him Rs 500.

Following a brief spell of unemployment and a short spell as an assistant at a car park, he joined the tea shop where he is presently employed. The ruthlessness and loneliness of the world has left him shattered. "I think I run all alone in this world," he says despondently.

Of the Rs 300 that he earns every month, he deposits Rs 200 in the bank. His bank balance stands at Rs 2000, he says proudly. Survival is his immediate aim but there is a larger objective towards which Shravan is working. He intends to retrieve the land that was mortgaged by his father. Already Shravan and Shatrughan have paid back the loan of Rs 8000 - only the interest remains to be paid.

Shravan was a dedicated lotte:ry buyer at one time; until he realized that it was adding nothing to his income. The cinema remains a favourite form of entertainment - he even wakes up early to see the noon show. "I have no friends here. Who keeps awake late at night and sleeps during the day? I miss my village. There, I used to play gully danda and marbles and I had a lot of friends. When I went to the village last year, I met them. They are still studying and playing games. I want to join them, but it is a question of survival for me."

Sharvan's mother wanted him to own a big shop - "like the one his father had owned," he says wistfully. He dreams of fulfilling her wish. He dreams of getting back their mortgaged land, and returning to the village for good, "I like being in my village. I like the films and the glitter of Delhi, but I prefer the greene:ry, the trees, and the fields of my village." Maybe the grit and intelligence he has shown, alone and friendless, in facing a hostile world, will also win for him his heart's desire.

Narendra Kumar, a thirteen year old Kendriya Vidyalaya student, was interviewed by The Illustrated Weekly of India. Read what he says about himself.

Interviewer : Hello, Narendra!
Narendra : Hello!
Interviewer : Congratulations! Narendra. I saw your photograph in the newspaper last week, when you won the Soviet Land Nehru Award for drawing and painting. Our readers are anxious to know more about you.
Narendra : Thank you, Sir. I think I was just lucky to get the award. The competition is held every year in my school and a large number of students take part in it.
Interviewer : That's good, very good. It's evident that your school encourages students to take part in various activities.
Narendra : Oh yes. Our teachers -especially my Art teacher, Mr. V. Sinha - gives us a lot of encouragement. My parents have encouraged me a lot, too.
Interviewer : When did you start painting?
Narendra : When I was three, I was attending the Shishu Vihar Nursery School. My teacher gave me a picture of a big kite one day. The picture was beautiful and that very day I asked my father to buy me some crayons and drawing paper... Soon my room was full of crayons and paper! I kept drawing whenever I found time. I now have a mini art room of my own at home!
Interviewer : That's great, really great! Do you want to become an artist when you grow up?
Narendra : No. Drawing and painting are just hobbies, which give me a great deal of pleasure. I want to become a police officer when I grow up. That's the only thing I've ever wanted to be.
Interviewer : Is that because your father is a police officer?
Narendra : Yes, maybe. I've been watching my father and other policemen for a very long time. I suppose I want to be like him!
Interviewer : Do you feel you have the qualities that a good police officer needs?
Narendra : Yes, I think so. A good police officer needs to be physically fit and mentally alert. I'm trying my best to grow into a healthy young man. I'm a member of the local sports club. I play tennis in the evenings and I also swim regularly.
Interviewer : How do you find time for all these activities?
Narendra : Well, I suppose I'm busy the whole day. Immediately after school I like to paint or play. I study before dinner and usually get to bed at about 10 o'clock.
Interviewer : Thank you, Narendra. It's been good talking to you. We wish you success.
Narendra : It's been a pleasure

There are many ways of expressing differences and similarities. Read the passage below, and study the expressions printed in italics.

Both day school and boarding school are institutions where children go to study.
While the former does not provide any residential accommodation, the latter expects children to live on campus. A boarding school has an advantage over a day school as their classes are normally smaller. However, the two schools are similar in aiming for high standards of education for all students.

Given below is a list or other expressions. Decide what each expression means, by writing D for 'difference' or S for 'similarity' against each. Try to add more expressions to your list and make use of them in writing your article in Question 6.

Write a magazine article about both the boys, in which you bring out the similarities and differences in their lives. Use the table you completed in Question 3. Give your article a suitable title. Remember 'CODER'.

Paragraph 1 : Give their names and ages. Compare their families, parents and backgrounds.
Paragraph 2 : Compare how each spends a typical day and their recreation/ hobbies.
Paragraph 3 : Compare their hopes / dreams / ambitions and your assessment of their future.

Using CBSE Class 9 solutions Children of India exercise by students are an easy way to prepare for the exams, as they involve solutions arranged chapter-wise also page wise. The questions involved in CBSE Solutions are important questions that can be asked in the final exam. Maximum students of CBSE Class 9 prefer CBSE Textbook Solutions to score more in exam.

Get the free view of chapter 6 Children of India Class 9 extra questions for English Course Communicative: Main Course Book Interact in English - Class 9 and can use Shaalaa.com to keep it handy for your exam preparation