Chapter 7: The Frog and The Nightingale

Chapter 8: Not Marble, nor the Gilded Monuments

Chapter 10: The Rime of the Ancient Mariner 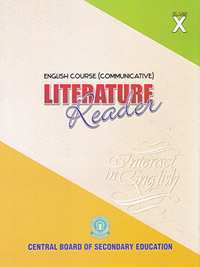 Given below is a list of words related to ghosts and ghost stories with their jumbled up meanings against them. Match the words/expressions with their correct meanings:

The title of the story is A Shady Plot. The dictionary defines the words as:
shady adjective

The title of the story is A Shady Plot. The dictionary defines the words as:
plot noun.

John wants the ghost to disappear before his wife enters the room and waves his arms
at the ghost with something of the motion of a beginner when learning to swim. His
movement shows his ………………………

When the narrator says his wife is never so pretty as when she's doing something she
knows he disapproves of, his tone is …………………….

Gladolia wishes to leave the narrator's house as ………………….

Which genre of stories does Jenkins want the narrator to write? Why?

Does the narrator like writing ghost stories? Support your answer with evidence
from the story.

What makes Helen, the ghost and her other co-ghosts organize The Writer's Inspiration Bureau? .

Why had Helen, the ghost, been helping the narrator write ghost stories? Why was she going on strike? What condition did she place for providing continued help?

How does the ghost undermine the narrator's faith in his ability to write ghost stories?

Why does John want the ghost to disappear before his wife appears on the scene? What impression of his wife's character do you form from his words?

Why does the narrator hesitate to be a partner to Laura Hinkle during the Ouija Board Party?

What message does the ghost convey to the group assembled in the narrator's house? What is their reaction to the message?

Do you agree with the narrator calling the assembly of women "manipulators?" Give reasons.

Why is John's wife angry? What does she decide to do?

Why does John wish himself to be dead?

When confronted by Lavinia about his flirtations over the Ouija Board, John insists that 'the affair was quite above-board, I assure you, my love'. Bring out the pun in John's statement.

John's apprehensions about his wife's reaction to her encounter with the ghost are
unfounded. Justify.

After her reconciliation with her husband, John Hallock, Lavinia writes a letter to
her friend expressing how her relationship with him has almost been on the verge
of breaking and what has saved it. Write her a letter.

John Hallock reflects upon his experience with Helen's ghost and in retrospect he finds it quite amusing. All the same he is relieved that he is no longer plagued by it. Ironically, the same ghost inspires his creativity and he writes a diary entry reflecting upon the comical aspect of his experience. Write his diary entry

The narrator and his wife reveal something about their character through their words and actions. We also learn about them from what other people say. Can you pick out the words that describe them from the box given below? Also, pick out lines and instances from the story to illustrate your choice.

Gladolia, the narrator's cook, is an African. The language she speaks is different from that of the others. This is known as Dialect. A dialect consists of words or phrases that reflect the regional variety of a language. An author often uses a dialect to make the dialogue more authentic. Initially, a dialogue may seem a little difficult to understand. However, as you continue reading, the language becomes more comprehensible.
Working in groups, write what Gladolia's words mean as shown.

Read and understand the following ghost phrases and expressions:

a) To give up the ghost-- to die or to stop trying
b) Aghost of a chance-- a poor chance, not likely to happen
c) The ghost at the feast-- something or someone that spoils your enjoyment by
reminding you of something unpleasant
d) Ghost town-- a town which most people have left, abandoned and deserted
e) Ghost-write- to write for someone else

f) Lay the ghost of something/somebody (to rest)-- to finally stop being worried
or upset by something or someone that has worried or upset you for a long time
g) Ghost image -- secondary image, especially. one appearing on a television
screen as a white shadow, caused by poor or double reception or by a defect in the
receiver
h) the ghost of a smile - faint trace of a smile
i) As white as a ghost- very pale or white in the face

Now complete the following story by using the appropriate phrases in the blanks
given below:
I was alone in a place that bore a deserted look like that of a ________________. I increased
the pace of my footsteps as I walked through the dark forest. I felt someone walking behind
me. I turned immediately and spotted the contour of a figure in the form of a ___________________ .It smiled at me wickedly .I started shaking with fear and perspiring
profusely when I felt its skeletal hand upon my neck. I woke up with a start, relieved that it was only a nightmare. This was not the first time I had had one. It had all started when I had watched the horrendous horror film with a eerie ghost character that had a scary ghost of a smile on its face.It had been almost a month. The strange thing was that I saw a similar face at the station the next morning. That was uncanny. I was to attend a dinner at my friend's at Northanger Abbey that night. I had decided to narrate my experience to the group that would assemble there. Although I knew, there was _________________________ that they would be convinced. After everyone had finished pouring their drinks to themselves, I cleared my throat and started narrating my spooky experience. However, every one of the group started accusing me of being _______________________ and held me responsible for spoiling the spirit of revelry. I gave up the ghost and sat quietly waiting for the party to be over. Back at home, the fears returned .I knew I had to talk about my experience to somebody to feel better. I have now decided to ______________ and publish my experience under a pseudonym. Only then can I ____________________.

Ghosts and haunting have fascinated the public for centuries. Although many doubt the existence of ghosts or other paranormal entities, many people dedicate their lives to searching and recording paranormal activity. Ghost tours, support groups and research societies, to name just a few, permeate our society and seek to answer questions about paranormal activity.   Interview your friends, relatives and people in your neighbourhood about whether they believe in the existence of ghosts. Ask them to tell you of any specific experiences they might have had in this context. In your groups, identify the most fascinating anecdote you have gathered on the basis of your interactions. Narrate it to the class

Do you think a story has an atmosphere? Complete the following blanks to make
up your ghost story by choosing the correct options.

Now that you have shared a ghost story/anecdote as well as completed a guided story in the class, create your own ghost story on the basis of the starters given below:

a) Stephen knew he would never sleep. The noises, those horrid sounds, would keep him awake...

b) Tap, tap, tap. Was it the branches of the nearby tree, or fingernails against the window?

c) People often say, 'There's no such thing as ghosts....

You are familiar with the key elements of a short story viz setting, plot, conflict, character and point of view. Given below are specifics to be kept in mind while writing a ghost story. Also make use of the vocabulary that you have learnt from the story ‘A
Shady Plot’.

While conventional Ghost stories are scary and gruesome, several modern versions are humorous. The Canterville Ghost, by Oscar Wilde, is one of the best ghost stories written in the vein of comic satire. The story that you just read is another example in case. Humour arises out of the narrator's ability to laugh at himself, clever use of language as well as comic situations. Discuss within your groups what makes the story, A Shady Plot humorous. Share your views during a class discussion.

The Ghost loved the stormy weather because ….(Complete the statement by
ticking the correct option)

The Ghost did not wish to frighten Virginia because ….(Complete the statement)

The Ghost was most angry with ….(Complete the statement by ticking the correct
option)

CBSE solutions for Class 10 English Course Communicative: Literature Reader chapter 4 (A Shady Plot) include all questions with solution and detail explanation. This will clear students doubts about any question and improve application skills while preparing for board exams. The detailed, step-by-step solutions will help you understand the concepts better and clear your confusions, if any. Shaalaa.com has the CBSE Class 10 English Course Communicative: Literature Reader solutions in a manner that help students grasp basic concepts better and faster.

Using CBSE Class 10 solutions A Shady Plot exercise by students are an easy way to prepare for the exams, as they involve solutions arranged chapter-wise also page wise. The questions involved in CBSE Solutions are important questions that can be asked in the final exam. Maximum students of CBSE Class 10 prefer CBSE Textbook Solutions to score more in exam.

Get the free view of chapter 4 A Shady Plot Class 10 extra questions for Class 10 English Course Communicative: Literature Reader and can use Shaalaa.com to keep it handy for your exam preparation