Observe the following pictures and discuss the questions in the class. On 19th August 2018, around 300 people died in Indonesia. Many buildings collapsed. Many roads broke apart. A tsunami was generated.

'A mountain never remains a mountain'. Can you relate this idiom with the mountain building process?

When can faults form in fold mountains?

Can folds form in block mountains? Find the reasons and discuss.

Look at figure During an earthquake, do you think the seismic waves reach entire portion of the earth? Is there any region on the Earth's surface where a given earthquake will not be reported? 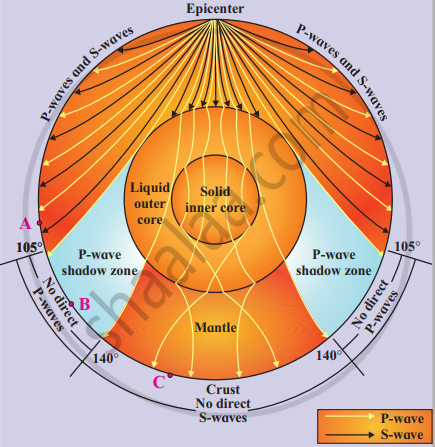 Shadow zone of an earthquake

Why has a shadow zone for L-waves not been shown in the figure?

Shadow zone of an earthquake

Observe the following diagrams. Try to understand the different types of fold shown in the diagram and match it with its characteristics. Write the name of the fold in the space given below. 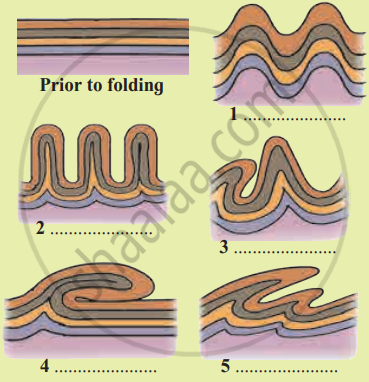 Observe the diagrams and read the explanation regarding the characteristics of various faults given below. Identify the faults and match each of them with their characteristics.

A) Normal fault: It results when a portion of land slides down along the fault plane and when the exposed portion of the plane faces the sky.

B) Reverse fault: It results when a portion of the land is thrown upward relative to other side of the land. In such situation, the fault plane faces the ground.

C) Tear fault: At times, the rock strata on either sides of the fault plane do not have vertical displacement. Instead, movement occurs along the plane in horizontal direction.

D) Thrust fault: When the portion of the land on one side of the fault plane gets detached and moves over land on the other side. The angle of fault plane is generally lowless than 45°.

VIEW SOLUTION
Can you tell? [Page 7]

In Figures A, B, C is three points on the earth's surface. Analyse their locations with respect to epicenter and shadow zones VIEW SOLUTION
Give it a try. [Page 8]

How to locate epicentre of a given earthquake?

Take the given hypothetical data in the table. The data shows the time of arrival of P-waves and S-waves at 3 seismograph stations. Assume the scale of the map as 1 cm: 18 km. See figure. 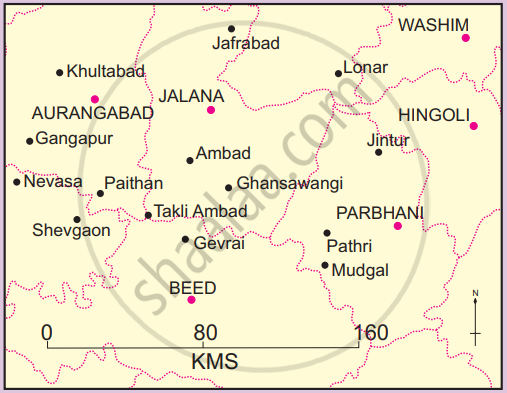 Find out examples of active, dormant and extinct volcanoes.

A: Faulting leads to the development of fold mountains.
R: Faulting occurs when tensional forces move away from each other.

A: South-East Asia, Japan, and islands in the Pacific Ocean are most vulnerable to earthquakes and volcanic eruptions.
R: They are located in the 'Ring of Fire'.

People living in the Himalayas are more vulnerable to earthquakes.

L-waves do not have a shadow zone.

Folds depend on the strength of rocks and the intensity of forces.

Explain with examples, different types of landforms produced by a volcanic eruption.

Explain the concept of the shadow zone.

Write a note on volcanic materials

Differentiate between Folding and faulting

Differentiate between Syncline and Anticline

Draw diagram of Types of folds

Draw diagram of Types of faults

Using Balbharati 11th solutions Earth Movements exercise by students are an easy way to prepare for the exams, as they involve solutions arranged chapter-wise also page wise. The questions involved in Balbharati Solutions are important questions that can be asked in the final exam. Maximum students of Maharashtra State Board 11th prefer Balbharati Textbook Solutions to score more in exam.

Get the free view of chapter 1 Earth Movements 11th extra questions for Geography 11th Standard Maharashtra State Board and can use Shaalaa.com to keep it handy for your exam preparation