1) All the activities/questions are compulsory.
2) Figures to the right indicate full marks.
3) Use of stencil is allowed for drawing map
4) Draw neat diagrams and sketches wherever necessary
5) Answers should be written in Black and Blue ink only.
6) Use of pencil/colour pencil is allowed for diagrams, sketches and map work.
7) Answers written in pencils will not be considered.

[4]1 | Identify the correct correlation and make a chain.

Identify the correct correlation and make a chain.

Find the odd man out :

Find the odd man out :

With reference to flora of India :

VIEW SOLUTION
Concept: Physiography - Physiography of India
Chapter: [0.03] Physiography and Drainage
[4]3 | Identify the correct option with the help of given statement (Attempt Any Four)
[1]3.1

Identify the correct option with the help of the given statement:

Identify the correct option with the help of the given statement:

The concentration of settlements is related to following major factors-

Proximity the to Sea

Where do you find dispersed settlements in India?

Near the transport routes

Choose the correct option from the following statement:

Prepare a choropleth map showing urban population using the data given in the table below.

Read the following map and answer the given questions. 1) Which is the largest river basin in Brazil?
2) In which direction does Paraguay River flow?
3) River Sao Francisco meets at which ocean?
4) Marajo Island is located near the mouth of which river?
5) Write the names of any two north flowing rivers.
6) Name the short-flowing river meeting the South Atlantic Ocean.

International tourists are attracted towards Brazil.

A wide variety of species of insects is found in Brazil.

Wildlife in India is decreasing day by day.

The density of population is sparse in Amazon basin.

With the help of the internet, obtain information regarding annual average temperatures of the continental location of Brasilia and Bhopal and explain it with the help of a graph.

Read the following graph and answer the questions

How will you manage the litter during the field visit?

Read the adjoining table and answer the following questions. 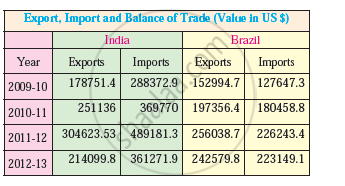 With the help of the pie chart given in fig tell what is the contribution of secondary activities in Brazil's GDP? How Maharashtra State Board Class 10th Board Exam Question Paper solutions Help Students ?
• Question paper solutions for Geography and Economics will helps students to prepare for exam.
• Question paper with answer will boost students confidence in exam time and also give you an idea About the important questions and topics to be prepared for the board exam.
• For finding solution of question papers no need to refer so multiple sources like textbook or guides.