Write an original short story in which two children and their Grandfather are the main characters.

Closed Circuit Television (CCTV) must be installed in every class room.

Give your views either for or against this statement.

Your class had to conduct a Morning Assembly. Write an account of how you prepared for it, what your role was and what you gained from the experience.

Summers are becoming hotter with each passing year. Write a description of one such very hot day. What did you see and hear as you walked outside ?

How were birds and animals affected ? 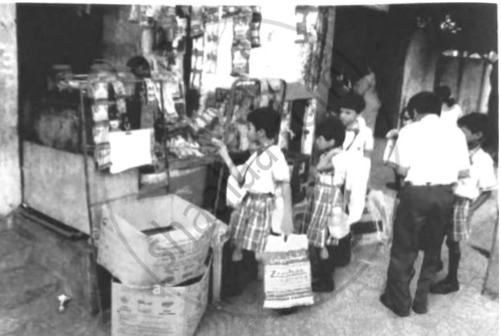 You want to start a new club in your school.

Write a letter to your Principal requesting permission to start the club, explain your role in it and give reasons to prove that the club will be beneficial for the school.

Your friend has not fared well in the recent examinations. Write a  letter to him/her expressing your concern. Give him/her some advice on how to score better marks and offer to help him/her to improve his/ her performance.

Your school is hosting an Inter-School Quiz Competition.

Write out a notice to be displayed in your school giving all details for the event.

Write an e-mail to the Principal of a neighbouring school requesting him/her to send a team of three members to participate in the Quiz Competition.

Read the following passage carefully and answer the questions that follow :

Billy Weaver had travelled down from London and by the time he arrived it was nine o’clock in the night and the moon was coming up.

“Excuse me,” he asked a porter. “but is there a cheap hotel nearby?”

“Try The Bell Hotel,” the porter answered, pointing down the road.

Billy thanked him, picked up his suitcase and set out to walk the distance to The Bell Hotel. He had never been to Richmond before. But the man at the Office had told him it was a splendid city.

Billy was seventeen years old. He was wearing a new navy-blue overcoat, a new brown hat, and a new brown suit, and he was feeling fine. He walked briskly down the street. He was trying to do everything briskly these days. The big shots up at the Head Office were fantastically brisk all the time. They were amazing.

The road was lonely and dark with a few scattered houses.

Suddenly, in a downstairs window Billy saw a printed notice propped up against the window glass. It said Bed and Breakfast.

He moved a bit closer and peered through the window into the room, and the first thing he saw was a bright fire burning in the hearth. On the carpet in front of the fire, a little dog was curled up asleep with its nose tucked into its belly. The room in half-darkness was filled with pleasant furniture. There was a piano and a big sofa and several plump armchairs; and in one corner he spotted a large parrot in a cage. Animals were usually a good sign in a place like this, Billy told himself and it looked to him as though it would be a pretty decent house to stay in .

Then a queer thing happened to him. He was in the act of stepping back and going away from the window when he felt a strange urge to ring the bell!
He pressed the bell. He heard it ringing, and then at once the door swung open and a woman was standing there.
She gave him a warm welcoming smile.
“Please come in,” she said pleasantly. Billy found himself automatically moving forward into the house.
“I saw the notice in the window,” he said, holding himself back.
“Yes, I know.”
“I was wondering about a room.”
“It’s all ready for you, my dear,” she said. She had a round pink face and very gentle blue eyes.
“How much do your charge?”
“Five dollars a night, including breakfast.”
It was fantastically cheap. He could easily afford it.

(a) Give the meaning of the following words as used in the passage :  One-word answers or short phrases will be accepted. [3]

Fill in each blank with an appropriate word.

Join the following sentences to make one complete sentence without using and but or so :

(i) He was very ill. He did not take any medicine.
(ii) You come back from your holiday. We will discuss the problem.
(iii) He remained absent on Friday. It was foolish of him.
(iv) Rahul ran all the way to the bus stop. He missed the bus.

VIEW SOLUTION
Concept: Writing
Chapter: [4] Writing
[8]5.d | Rewrite the following sentences according to the instructions given after each. Make other changes that may be necessary, but do not change the meaning of each sentence.
[1]5.d.i

It rained so heavily that they could not go for the picnic. (Rewrite: Using ‘too………………to’)

If your friends get here before 7 o’clock we can take them out for dinner.
(Rewrite: Using ‘unless’)

The school captain was elected by the students of classes XI and XII.
(Begin: The students ………………….)

Greenland is the largest island in the world.
(Rewrite: Using ‘larger’.)

Arun was asked by his mother to explain the missing buttons on his shirt.
(Rewrite: Using ‘explanation’)