Which one of the following was NOT given primacy by the makers of the soviet system?

(a) Abolition of private property

(b) Society based on the principle of equality

(c) No opposition party to be allowed

(d) No state control over economy

VIEW SOLUTION
Concept: What is Soviet System
Chapter: [0.012] The End of Bipolarity
[1]2

What does the logo on the ASEAN flag symbolize?

Why is it said that history of petroleum is also the history of war and struggles?

VIEW SOLUTION
Concept: India as an Arena of Globalization and Struggle Against It
Chapter: [0.019] Globalisation
[1]4

During Nehru era, why did some political parties and groups in our country believe that India should be more friendly with the bloc led by the U.S.?

How did the farmers associated with Bharatiya Kisan Union differ from the most other farmers in India?

What constrained the Super Powers to go for a full-fledged war inspite of having nuclear weapons?

What was 'Operation Blue Star'? Why did it hurt the sentiments of the Sikh Community?

Why and how did the Mizo Movement for succession gain popular support?

What is Human Rights Watch? Describe its main contribution to the field of human right.

What was the 'Earth Summit? How far did the summit prove to be useful? Explain.

Explain any four reasons for the dominance of the Congress Party in the first three general elections in India.

Evaluate the major outcomes of the Indian model of mixed economy.

Examine the conditions responsible for the growth of Naxalite Movement in India. Suggest ways and means to crush it.

The value of the ruble declined dramatically. The rate of inflation was so high that people lost all their savings. The collective farm system disintegrated leaving people without food security, and the government started to import food. The old trading structure broke down with no alternative in its place. The old system of social welfare was systematically destroyed. The withdrawal of government subsidies pushed large sections of the people into poverty.

Globalisation does not always reduce state capacity. The primacy of the state continues to be unchallenged basis of political community. The old jealousies and rivalries between countries have not ceased to matter in world politics. The state continues to discharge its essential functions (law and order national security) and consciously withdraws from certain domains from which it wishes to. States continue to be important

Indeed, in some respects state capacity has received a boost as a consequence of globalisation, with enhanced technologies available at the disposal of the state to collect information about its citizens.

Read the passage given above carefully and answer the following questions:-

Two developments strained this relationship. China annexed Tibet in 1950 and thus removed a historical buffer between the two countries. Initially, the government of India did not oppose this openly. But as more information came in about the suppression of Tibetan culture, the Indian government grew uneasy. The Tibetan spiritual leader, the Dalai Lama, sought and obtained political asylum in India in 1959. China alleged that the government of India was allowing anti-: China activities to take place from within India.

Read the above passage carefully and answer the following questions:-

What is meant by 'historical buffer?

Why didn't Government of India oppose the annexation of Tibet by China?

How far was it justified on the part of India to grant political asylum to the Dalai Lama and thousands of Tibetan refugees? Study the above cartoon carefully and answer the following questions:-

In the given outline map of South Asia, five countries have been marked as (A), (B), (C), (D) and (E). Identify them on the basis of the information given below and write their correct names in your answer book with their respective serial number of the information used and the alphabet concerned as per the following format: 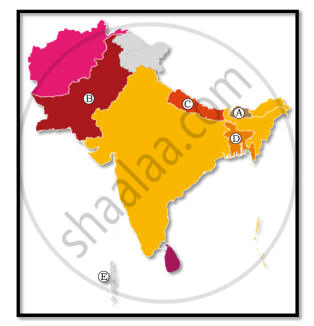 (i) The country has experienced civilian as well as military rule both.

(ii) Democracy was restored in this country in 2006.

(iii) This country is still a monarchy.

(iv) The Parliament of this country voted unanimously to introduce multiparty system in June 2005.

(v) This country is a part of India's 'Look East Policy via Myanmar'.

VIEW SOLUTION
Concept: India as an Arena of Globalization and Struggle Against It
Chapter: [0.019] Globalisation
[6]22 | Attempt any ONE
[6]22.1

How did the Soviet Union suddenly disintegrate? Explain any six reasons.

Why was the end of the Second World War considered to be the beginning of Cold War? Explain.

'Resistance is the only option available to overcome the hegemony". Justify the statement by comparing it to other antihegemony strategies.

Assess the role of ASEAN as an economic association.

Trace the evolution of the United Nations since its establishment in 1945. How does it function with the help of its structures and agencies?

VIEW SOLUTION
Concept: Restructuring and the Future of the UN
Chapter: [0.016] International Organizations
[6]24.2

Describe the security challenges faced by the newly independent countries of Asia and Africa after the Second World War.

VIEW SOLUTION
Concept: Traditional Concerns of Security and Politics of Disarmament
Chapter: [0.017] Security in Contemporary World
[6]25 | Attempt any ONE
[6]25.1

Analyse any six consequences of the partition of India in 1947.

Assess the outcomes of the early phase of planned development in India.

Examine the major changes that the country witnessed at the time of fourth general election in 1967.

Why is emergency considered to be one of the most controversial episodes in Indian politics? Analyse any three reasons.

Who were Dalit Panthers? Describe their main activities.

Describe the story of Goa's liberation from the Portuguese to its becoming a state of the Indian Union.