Write a Short Essay (About 250-300 Words) on the Following:- What Does the Architecture of Buildings like the Lotus Mahal and Elephant Stables Tell Us About the Rulers Who Commissioned Them? - History

What does the architecture of buildings like the Lotus Mahal and elephant stables tell us about the rulers who commissioned them?

The architecture of buildings like the Lotus Mahal and elephant stables tell us that the rulers had adopted Indian traditional symbol, signs and totems. They were Hindu by faith but they were liberal by nature.

Lotus Mahal:- Lotus Mahal was so named by the British travellers in the 19th century.

Historians have different opinions regarding the use of this building. According to a few this building was used as a council of chamber where the king met his advisers.

A photography of Lotus Mahal 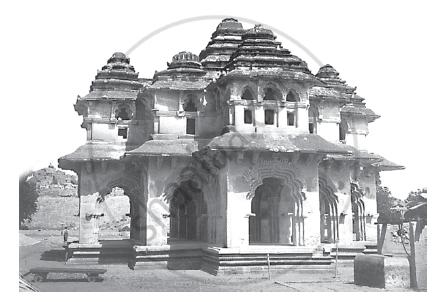 In this regard, they gave the evidence of a map drawn by Colonel Colin Mackenzie. This building is constructed in Indo-Islamic style of architecture. The pillars and arch were built in Muslim style while the wall and roof were constructed in Indian style wood and stone figures were engraved on the walls and roof to give them a decorative appearance with the passage of time to the most part of this building got destroyed, hence it is difficult to guess its grandeur.

Elephant stables:- The Rayas (rulers) of the Vijayanagara maintained a very large army and troops. There were a large number of elephants in the army. To keep these elephants, Elephant stable was constructed near the Lotus Mahal in which a number of rooms were lined.

Concept: The Royal Centre
Is there an error in this question or solution?
Chapter 7: An Imperial Capital: Vijayanagara - Exercise [Page 194]
Q 7 Q 6Q 8
Advertisement Remove all ads