With the Help of a Circuit Diagram, Explain the Working of a Junction Diode as a Full Wave Rectifier. Draw Its Input and Output Waveforms. Which Characteristic Property Makes the Junction Diode - Physics

With the help of a circuit diagram, explain the working of a junction diode as a full-wave rectifier. Draw its input and output waveforms. Which characteristic property makes the junction diode suitable for rectification? 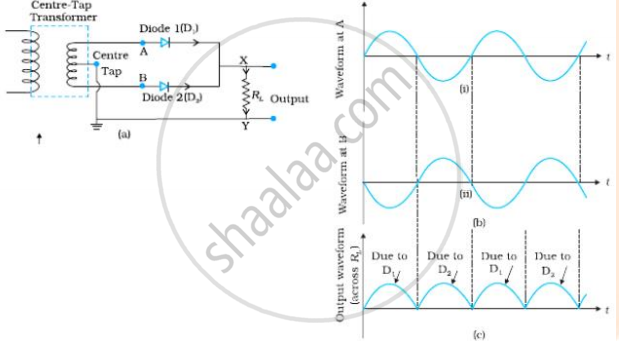 (c) Output waveform across the load RL connected in the full-wave rectifier circuit.

As can be seen from Fig. (c) the voltage rectified by each diode is only half the total secondary voltage. Each diode rectifies only for half the cycle, but the two do so for alternate cycles. Thus, the output between their common terminals and the centre tap of the transformer becomes a full-wave rectifier output.
Suppose the input voltage to A with respect to the centre tap at any instant is positive. It is clear that, at that instant, the voltage at B being out of phase will be negative as shown in Fig. (b). So, diode D1 gets forward biased and conducts (while D2 being reverse biased is not conducting). Hence, during this positive half cycle, we get an output current (and an output voltage across the load resistor RL) as shown in Fig. (c).

In the course of the ac cycle when the voltage at A becomes negative with respect to the centre tap, the voltage at B would be positive. In this part of the cycle diode D1would not conduct but diode D2would, giving an output current and output voltage (across RL) during the negative half cycle of the input ac. Thus, we get output voltage during both the positive as well as the negative half of the cycle.
The diode under forward biased offers negligible resistance so it will conduct while under reverse biased it offers very high resistance so it will not conduct. Therefore it is a unidirectional device which conducts only in one direction. This characteristic property makes the junction diode suitable for rectification