With the help of suitable diagram describe the logistic population growth curve.

(a) Lag phase: Initially, the population of the yeast cell is very small. This is because of the limited resource present in the habitat.

(b) Positive acceleration phase: During this phase, the yeast cell adapts to the new environment and starts increasing its population. However, at the beginning of this phase, the growth of the cell is very limited.

(c) Exponential phase: During this phase, the population of the yeast cell increases suddenly due to rapid growth. The population grows exponentially due to the availability of sufficient food resources, constant environment, and the absence of any interspecific competition. As a result, the curve rises steeply upwards.

(d) Negative acceleration phase: During this phase, the environmental resistance increases and the growth rate of the population decreases. This occurs due to an increased competition among the yeast cells for food and shelter. 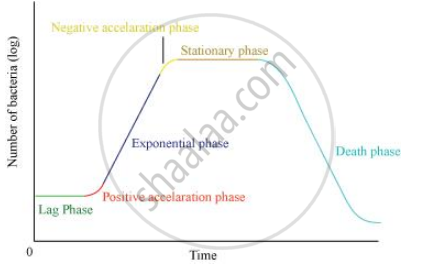 A Verhulst−pearl logistic curve is also known as an S-shaped growth curve.

The S-shaped growth curve is also called a logistic growth curve. It describes a situation in which (in a new environmental condition) the population density of an organism increases slowly establishing itself then increasing rapidly, approaching an exponential growth rate. Many population of micro-organisms broadly follow this basic sigmoidal pattern. For example, when a fresh culture medium is inoculated with bacteria, sigmoidal or S-shaped growth curve is observed. The S-shaped curve is generated when a population approaches the environmental’s carrying capacity. Carrying capacity is the maximum number of individuals of a population that can be supported in a given time. 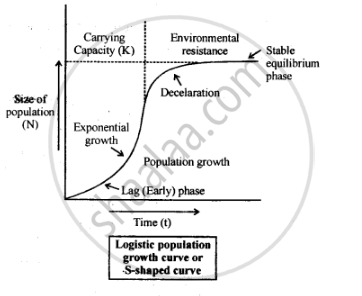 Concept: Population Growth
Is there an error in this question or solution?
Chapter 13: Organisms and Populations [Page 240]
Q 16Q 15.5Q 17