With a neat, labelled diagram, describe the parts of a typical angiosperm ovule. - Biology

With a neat, labelled diagram, describe the parts of a typical angiosperm ovule.

An ovule is a female megasporangium where the formation of megaspores takes place. 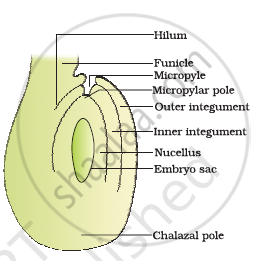 The various parts of an ovule are –

A typical angiospermic ovule is a small structure which is formed in the ovary. The ovule first develops as a projection on the placenta and composed of multilayered cellular tissue called the nucellus. The hypodermal cell of die nucellus enlarges and transformed into megaspore mother cell. This cell undergoes meiosis to produce four haploid cells, only one of which develops & forms an embryo sac (female gametophyte). An ovule may be surrounded by one or two protective layers called integuments, leaving a small opening at one end termed as micropyle which acts as passage for the entry of the pollen tube into the ovule. Thus, a typical ovule consists of a fully developed embryo sac with the nucellus and integuments

Concept: Parts of Flower - Essential Parts of Flower: Gynoecium
Is there an error in this question or solution?
Advertisement Remove all ads
Chapter 2: Sexual Reproduction in Flowering Plants - Exercises [Page 40]
Q 4Q 3Q 5