The doctor said to himself, "If my word can save his life, he shall not die.
The will be damned." He called, "Gopal, listen." This was the first time he was going to do a piece of acting before a patient, simulate a feeling and conceal his Judgement. He stooped over the patient and said, with deliberate emphasis, "Don't worry about the will now. You are going to live. Your heart is absolutely sound."
A new glow suffused the patient's face as he heard it. Be asked in a tone of relief,
"Do you say so? If it comes from your lips it must be true............ . "
The doctor said, "Quite right. You are improving ever second. Sleep in peace. You must not exert yourself on any account. You must sleep very soundly.
I will see you in the morning." The patient looked at him gratefully for a moment and then closed his eyes. The doctor picked up his bag and went out, shutting the door softly behind him.
On his way home he stopped for a moment at his hospital, called out his assistant and said, "That Lawley Extension case. You might expect the collapse any second now. Go there with a tube of .....................................'in hand, and give it in case the struggle is too hard at the end. Hurry up.”
Next morning he was back at Lawley Extension at ten. From his car he made a dash for the sick bed. The patient was awake and looked very well. The assistant reported satisfactory pulse. The doctor put his tube to his heart, listened for a while and told the sick man's wife, "Don't look so unhappy, lady. Your husband will live to be a ninety.’’ When they were going back to the hospital, the assistant sitting beside him in the car asked, "Is he going to live, sir?"
"I will bet on it. He will live to be ninety. He has turned at corner. How he has survived this attack will be a puzzle to me all my life," replied the doctor.

A2. Web
Complete the web: 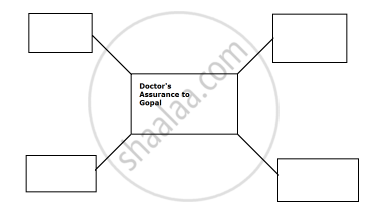 A3. Personal Response
What is your opinion about the doctor and his behaviour?

A1.
(i) The following question was asked by the assistant to the doctor.
(ii) The doctor said the following words to his assistant.

A3. The doctor was kind hearted and extremely dedicated to his profession. He was willing to go out of his way to aid his patients. He was supportive and gave Gopal a reason to hope for the better. His patients relied on his word on account of his dedication and hard work.