What is tangent law? Discuss in detail. - Physics

What is tangent law? Discuss in detail.

When a magnetic needle or magnet is freely suspended in two mutually perpendicular uniform magnetic fields, it will come to rest in the direction of the resultant of the two fields.

Let B be the magnetic field produced by passing a current through the coil of the tangent Galvanometer and BH be the horizontal component of the earth’s magnetic field. Under the action of two magnetic fields, the needle comes to rest making angle θ with BH, such that 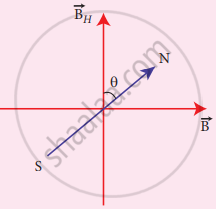 When no current is passed through the coil, the small magnetic needle lies along the horizontal component of Earth’s magnetic field. When the circuit is switched ON, the electric current will pass through the circular coil and produce a magnetic field. Now there are two fields that are acting mutually perpendicular to each other. They are: