What is Hydropower? Draw a Suitable Diagram and Explain How Hydropower is Generated. - Environmental Studies

What is hydropower? Draw a suitable diagram and explain how hydropower is generated.

Hydropower:
Hydropower uses the Earth's water cycle to generate electricity because movement of water as it flows downstream creates kinetic energy which can be then converted into electricity. Hydropower is the leading renewable source for electricity generation globally, supplying 71% of all renewable electricity. Reaching 1,064 GW of installed capacity in 2016, it generated 16.4% of the world’s electricity from all sources.

Hydropower Plants:
Principle:
Hydropower uses the natural gradient force of water flowing down from a considerably
height under gravity which is capable to turn turbines to generate electricity.
There are three types of hydropower plants:

The basic components of a conventional hydropower plant are: 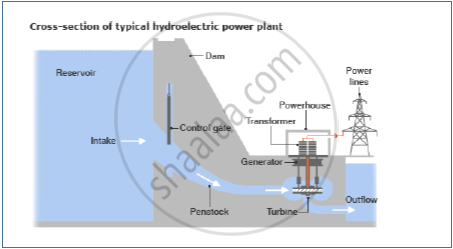 Concept: Principle and working with schematic diagram of Hydropower
Is there an error in this question or solution?
2016-2017 (December) CBCGS
Q 2.C Q 2.BQ 3.A
Advertisement Remove all ads