The lubricants are defined as the chemical substances which reduce friction between two sliding/moving metal surfaces and thereby reduce wear and tear of machines .The lubricant keeps the two surfaces apart ,thus the frictional resistance reduces .
The process of reducing frictional resistance between moving/sliding surface ,by introduction of lubricants in between them is called lubrication .
Hydrodynamic Lubrication :
Fluid film lubrication is done by introducing sufficiently thick layer of liquid lubricant at least 1000 ֯a thick in between the moving or sliding surfaces .Lubricant film first of all covers the irregularities of the sliding surfaces and then forms a thick layer between them .This thick layer of lubricant avoids metal to metal contact and reduces frictional resistance and hence wear and tear .The coefficient of friction is as low as 0.001-0.03 .

In this case lubricant film acquires the motion of machine and hence the resistance to movement of moving parts is only due to the internal resistance between the particles of the lubricant moving over each other .

Thus in fluid film lubrication ,lubricant used is liquid lubricant with optimum viscosity ,because if viscosity is more ,it will resist smooth movement of machine decreasing the efficiency of machine .If viscosity is less ,it may squeeze out from machine parts leaving no lubrication in between the machine part which will make metallic surfaces to come in direct contact resulting in the generation of heat and wear and tear .

Hydrodynamic lubrication occurs in the case of a shaft running at a fair speed in a well lubricated bearing with not too high road .If the centre line of shaft is displaced from the journal axis ,a wedge shaped lubricant film can be drawn in .
According to hydrodynamic theory , development of sufficient pressure is generated to keep shaft and journal (bearing) apart and the shaft floats in the lubricant . 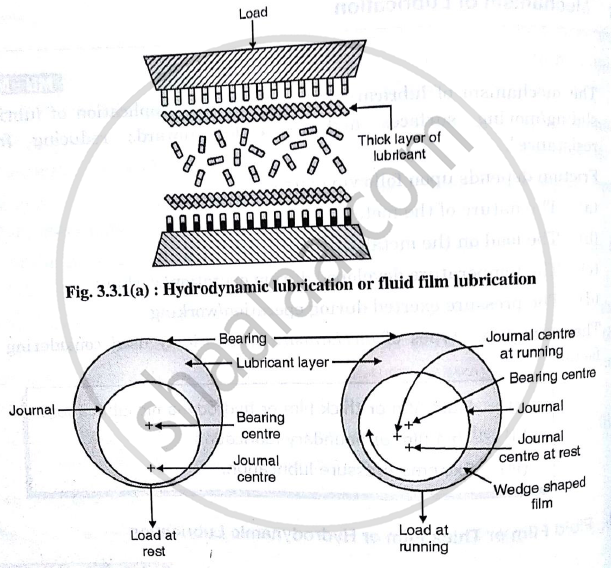 Concept: Lubricants
Is there an error in this question or solution?
Advertisement Remove all ads
2018-2019 (December) CBCGS
Q 6.aQ 5.cQ 6.b.i