Describe Briefly How the Davisson-germer Experiment Demonstrated the Wave Nature of Electrons. - Physics

Describe briefly how the Davisson-Germer experiment demonstrated the wave nature of electrons.

Experiment:
Experimental arrangement used by Davisson and Germer: Electrons from a hot tungsten cathode are accelerated by a potential difference V between the cathode (C) and anode (A).

A narrow hole in the anode renders the electrons into a fine beam of electrons and allows them to strike a nickel crystal. 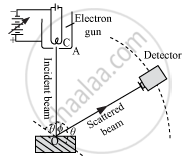 The electrons are scattered in all directions by the atoms in the crystal and its intensity in a given direction is found by the use of a detector.

The graph is plotted between angle Φ (angle between incident and the scattered direction of the electron beam) and intensity of the scattered beam.

The experimental curves obtained by Davisson and Germer are as shown in the figure below: