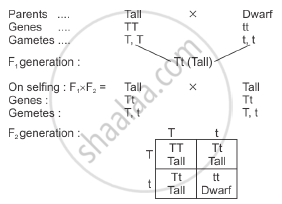 Such a cross depicts the law of dominance in which all traits are controlled by a pair of factors called genes. In a dissimilar pair of factors, one member of the pair is dominant, while the other is recessive.

Concept: Deviations from Mendelism - Incomplete Dominance, Co-dominance, Multiple Alleles and Inheritance of Blood Groups, Pleiotropy
Is there an error in this question or solution?
2014-2015 (March) All India Set 2
Q 14Q 13Q 15