The World'S Most Famous Female Aviator, Amelia Earhart, Disappeared in 1937, as She Attempted to Become the First Woman to Fly Around the World with Her Navigator, - English - Communicative

The world's most famous female aviator, Amelia Earhart, disappeared in 1937, as she attempted to become the first woman to fly around the world with her navigator, Fred Noonan. She was last heard when she was around 100 miles from the tiny Pacific Howland Island on July 2, 1937.

Read the story of her 'Final Flight'.

On June 1, 1937 Amelia and her navigator Fred Noonan departed from Miami, Florida; bound for California. Their first destination was San Juan, Puerto Rico; from there, skirting the northeast edge of South America; and then on to Africa and the Red Sea.

The flight to Karachi was another first. No one had previously flown non-stop from the Red Sea to India before. From Karachi, the Electra flew to Calcutta on June 17 from there on, to Rangoon, Bangkok, Singapore and Bandoeng.

The monsoon prevented departure from Bandoeng for several days. Repairs were made on some of the 'long distance' instruments which had given trouble previously. During this time, Amelia became ill, and suffered from dysentery that lasted several days.

It was June 27 before Amelia and Noonan were able to leave Bandoeng for Port Darwin, Australia. At Darwin, the direction finder was repaired, and the parachutes were packed and shipped home as they would be of no value over the Pacific .

Amelia reached Lae in New Guinea on June 29. At this point they had flown 22,000 miles and there were 7,000 more to go over the Pacific. Amelia cabled her last commissioned article to the Herald Tribune. Photos show her looking very tired and ill during her time at Lac.

The U.S. Coast Guard cutter, Itasca had been standing off Howland Island for some day to act as a radio contact for Amelia Radio communications in the area were very poor as Itasca was overwhelmed with commercial radio traffic that the flight had generated .

Amelie left Lae at preciaely 00:00 hours Greenwich Mean Time on July 2 . It is believed that the Electra was loaded with 1,000 gallons of fuel , allowing for 20-21 hours of flying .
At 07:20 hours GMT Amelia provided a position report placing the Electra on course as some 20 miles southwest of the Nukumanu Islands . The last weather report Amelia was known to have received was before take-off . The head wind speed had increased by 10-12 mph, but it is not known if she ever received the report.
At 08:00 GMT Amelia made her last radio contact with Lae . she reported being on course for Howland Island at 12,000 feet . There is no real evidence as to the precise track of the aircraft after Nukumanu . No one saw or heard the plane fly over .
Several short transmissions were received by the Itasca with varying signal strengths but they were unable to get a fix on her location because they were too brief. At 19:30 GMT the following transmission was received from the Electra at maximum strength.
"KHAQQ calling Itasca. We must be on you but cannot see you ... gas is running low ... "

At 20: 14 GMT, the Itasca received the last voice transmission from Amelia giving positioning data. The Itasca continued to transmit on all frequencies until 21:30 hours GMT. They determined that Amelia must have died at sea and began to implement search procedures.

It has been determined that the plane went down some 35-100 miles off the coast of Howland Island. A life raft was stowed on board but no trace was ever found of the raft. Some experts felt that the empty fuel tanks could keep the plane afloat for a period of time.

President Roosevelt authorized a search party of 9 naval ships and 66 aircrafts at an estimated cost of over $4 million. On July 18, the search was abandoned by ships in the Howland area. George continued to seek help in the search, but by October he too abandoned all hope of finding them alive.

Amelia had been sending letters to George at stopovers all along her route quite regularly. These were published in the book 'Last Flight'. The book has a note from her to George ....
"Please know I am quite aware of the hazards ... I want to do it because I want to do it. Women must try to do things as men have tried. If they fail, their failure must be, but a challenge to others. " 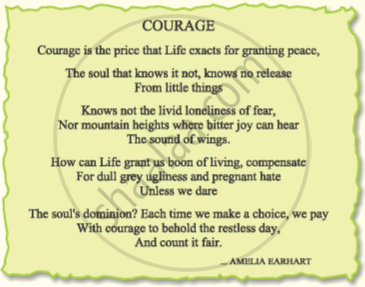 Amelia created a number of aviation records :
o The first woman to fly across the Atlantic in 1928
o The second person to fly solo across the Atlantic in 1932
o The first person to fly solo from Hawaii to California in 1935 Guided by her publicist and husband, George Putnam, she made headlines in an era when aviation had gripped the public's imagination.

Summary.
The world’s most famous female aviator, Amelia Earhart, disappeared in 1937. She attempted to become the first woman to fly around the world with her navigator, Fred Noonan. She was last heard of from about 100 miles from the tiny Pacific Howland Island on July 2, 1937. Major portion of her endeavour was completed without major hiccups.

When she reached Bondoeng, she started suffering from dysentery but it was a minor problem given the scale of task she had planned to do. She faced no problem up to New Guinea. Later on after flying from Lae, her plane met the tragic end.
Guided by her publicist and husband, George Putnam, she made headlines in an era when aviation gripped the public’s imagination.

Concept: Reading
Is there an error in this question or solution?
Chapter 2.1: The Final Flight - Exercise [Page 26]
Q 2 Q 1Q 3
Advertisement Remove all ads