The Force of Surface Tension Acts Tangentially to the Surface Whereas the Force Due to Air Pressure Acts Perpendicularly on the Surface. - Physics

The forces act tangentially to the bubble surface on both sides of a given line but they have one component normal to the bubble surface. This component balances the force due to excess pressure inside the bubble.
In the figure, let us consider a small length AB on the surface of the spherical bubble. Let the surface forces act tangentially along A and B. On producing the forces backwards, they meet at a point O. By the parallelogram law of forces, we see that the resultant force acts opposite to the normal. This balances the internal forces due to excess pressure. 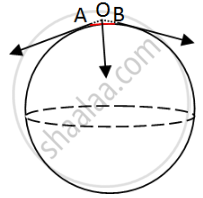 Concept: Surface Tension
Is there an error in this question or solution?
Chapter 14: Some Mechanical Properties of Matter - Short Answers [Page 297]
Q 15 Q 14Q 16
Advertisement Remove all ads