Study the Picture Given Below. Write a Short Story Or Description Or an Account of What the Picture Suggests to You. Your Composition May Be About the Subject of the Picture Or You - English (Literature in English) 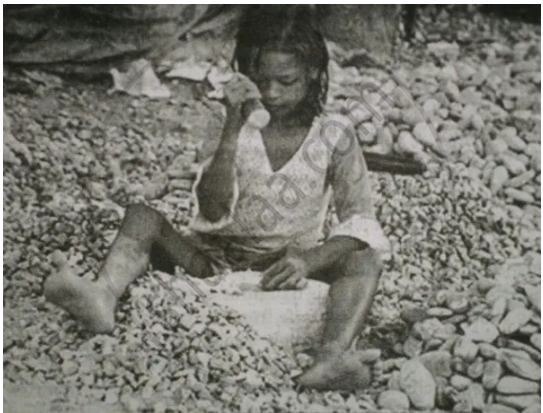 The picture vividly portrays a poor girl Pinky working hard at breaking stones to make a living. Such is her misery that in the days when she should be going to school and playing she has to survive such in her irony that instead of smiles and carefreeness her face is writ large with worry for earning her bread.
Child labour is another name which can be given for this picture. It is a serious blot in the efforts to project the nation as a dynamic country. The root cause of child labour is poverty and to some extent ignorance. And this is a stark truth that without work these child labourers would starve to death. The parents cannot afford to feed them and these little children are forced to work. Thus, the hands that should be used for study or play are used for hard manual work.
This girl ‘Pinky’ has become symbolic of all child labourers who are exposed to the difficulties of the world at such a tender age. It is a pity to see the coil and shoulder responsibilities which is far more than their shoulders can bear.
The girl is forced to do hazardous work without proper compensation. She is risking her life just to keep their body and soul together. So tragic is her condition that she has turned into a physical and mental wreck. Her weak body seems to suffer from the disease.
The government should realize the guilty of the situation and take strict actions to ban child labour. Though it has been declared an offence the laws are not effectively enforced. The reason could be, that though the law has been made, there is no provision for the child to cater to his basic needs like food and shelter. No ban can work unless we can ensure that they are provided with food, shelter and education. This would bring back their childhood, but also secures the future of the nation. For the progress of the nation, it should ensure that no Pinky goes to sleep hungry.