Study the graph given below and answer the questions that follow : 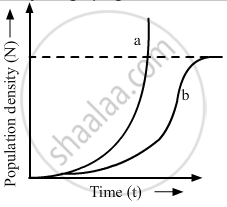 (i) Write the status of food and space in the curves (a) and (b).
(ii) In the absence of predators, which one of the two curves would appropriately depict the prey population?
(iii) Time has been shown on X-axis and there is a parallel dotted line above it. Give the significance of this dotted line

(ii) In the absence of predators, curve (a) would appropriately depict the prey population.