Study the following graph and analyse in short. 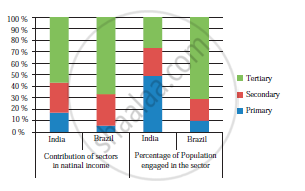 The graph depicts the contribution of each sector to the national income and the percentage of the population engaged in the respective sectors.

The contribution of the industrial sector is relatively the same in both the counties. It is nearly 20% in both the economies. The percentage of population engaged is also similar.