State the theory of Biogenesis. How does Miller’s experiment support this theory? - Biology

State the theory of Biogenesis. How does Miller’s experiment support this theory?

The theory or law of biogenesis was proposed by Louis Pasteur. He proposed that all life originated from pre-existing life. These cells further originated from the organic compounds. So, ultimately life could have come from pre-existing non-living organic molecules (e.g. RNA, protein, etc.) and that formation of life was preceded by chemical evolution, i.e., formation of diverse organic molecules from inorganic constituents. In 1953, Urey and Miller conducted an experiment to prove this theory. They created the conditions of primeval earth − high temperature, volcanic storms, reducing atmosphere containing CH4, NH3, etc at laboratory scale. They then stimulated electric discharge in a closed flask containing CH4, H2, NH3 and water vapour at 8000°C. They observed formation of amino acids. In similar experiments others observed, formation of sugars, nitrogen bases, pigment and fats. These small organic molecules are the building blocks for proteins & other components. Hence, this experiment supported that life has come from pre-existing non-living organic molecules. 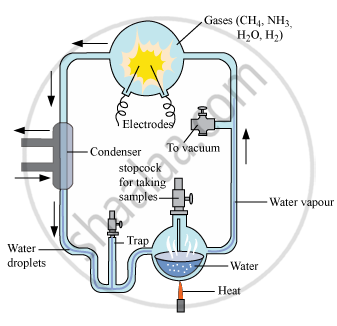