Lami's theorem states that if three forces acting at a point are in equilibrium, each force is proportional to the sine of the angle between the other two forces. 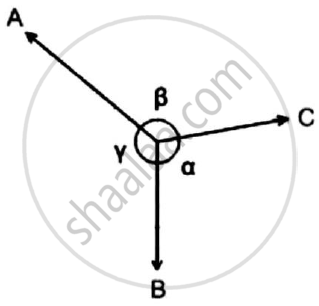 According to Lami’s theorem, the particle shall be in equilibrium if :
`A/sin alpha =B/sinβ =C/sin Y`
The conditions of Lami’s theorem are :
(1)Exact 3 forces must be acting on the body.
(2)All the forces should be either converging or diverging from the body.

Concept: Condition of equilibrium for parallel forces
Is there an error in this question or solution?
2016-2017 (June) CBCGS
Q 1.2 Q 1.1Q 1.3
Advertisement Remove all ads