State and Explain the Law of Dominance as Proposed by Mendel. - Biology

(a) According to Mendel's law of dominance, characters are controlled by discrete units called 'factors'. These 'factors' occur in pairs, where one member of the pair dominates the other in a dissimilar pair.
The Mendel's law of dominance was given on the basis of results of monohybrid crosses where, in F1 generation, only one of the parental characters is expressed, and in F2 generation, both are expressed.
This can be understood as follows: 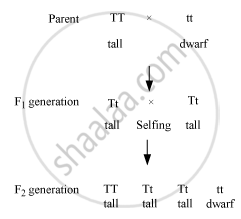 Here, for the height of a plant, tallness is a dominant trait, while dwarfness is recessive trait. If a pure tall plant (TT) is crossed with a short plant (tt), then F1 generation will be all tall but their genotype will be heterozygous (Tt) and on selfing of F1 generation, both tall and short plants will arise in F2 generation in the phenotypic ratio of 3 : 1 and genotypic ratio of 1 : 2 : 1.

(b) As shown above in Mendelian monohybrid cross, F1 generation is all tall and F2 generation has both tall and dwarf plants.
In case of Snapdragon, incomplete dominance is observed. Here, dominant trait is not completely dominant over recessive trait and both produce an intermediate phenotype in heterozygous condition, that is, none of them express their typical phenotype when present together. In case of co-dominance, both alleles express their phenotype independently in the heterozygous condition. In human blood group, multiple allelism is observed, that is, more than two contrasting forms of a gene are present.
The ABO blood group is controlled by 3 alleles: IA, IB, and i.  The alleles IA and IB are completely dominant over i but when IA and IBare present together, they both express themselves and behave as co-dominant alleles.

Concept: Mendelian Inheritance - Mendel’s Laws of Heredity
Is there an error in this question or solution?
Advertisement Remove all ads
2014-2015 (March) Foreign Set 3
Q 24.1Q 23Q 24.2