State the Different Types of Bio-geochemical Cycles and Explain the Importance of Those Cycles. - Science and Technology

State the different types of bio-geochemical cycles and explain  the importance of those cycles.

There are two major types of biogeochemical cycles

1. Gaseous cycle: These are the biogeochemical cycles in which the reservoir pool is the atmosphere or hydrosphere. For example, carbon cycle, nitrogen cycle etc.

2. Sedimentary cycles: These are the biogeochemical cycles in which the reservoir pool is generally lithosphere. For example, Phosphorous cycle, Sulphur cycle etc.

Nitrogen Cycle
The concentration of nitrogen in the atmosphere is about 78%. Nitrogen is essential for all life forms. It is a structural component of many important bio-molecules such as DNA, RNA and vitamins. 1. Nitrogen fixation: It is the process wherein atmospheric nitrogen is converted into water-soluble nitrates. This step is performed by organisms like Rhizobium, Azotobacter and blue-green algae.

Oxygen is an important component of life. We cannot survive without oxygen. It comprises about 21% of atmospheric air. It is also present in dissolved form in water bodies and helps in the survival of aquatic life. In combined form, it is found both in Earth’s crust and in the air. In the air, it occurs as carbon dioxide. In the crust, it is present as oxides of most metals and silicon and also as carbonate, sulphate, nitrate and other minerals. 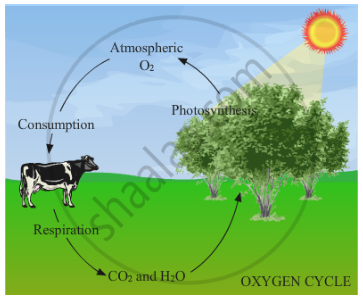 Oxygen is also a part of several essential bio-molecules such as carbohydrates, proteins, nucleic acids and fats. There are processes that utilize atmospheric oxygen. At the same time, the balance of oxygen in the atmosphere is also maintained.

All organic substances are made up of carbon. Fats, vitamins, nucleic acids, carbohydrates and proteins contain carbon as a structural component. Carbonate salts form endoskeletons and exoskeletons of many animals. 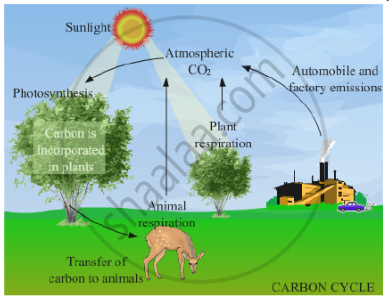 Carbon enters life forms through the process of photosynthesis. During photosynthesis, carbon dioxide and water combine to produce glucose and oxygen. This changes the atmospheric carbon into glucose molecules.
Concept: Biogeochemical Cycle
Is there an error in this question or solution?
Chapter 7: Energy Flow in an Ecosystem - Exercise [Page 87]
Q 7 Q 6Q 8.1
Advertisement Remove all ads