Solve the Following Question and Mark the Most Appropriate Option. There Were 200 Students Who Gave a Competitive Exam. the Exam Had Three Sections English, Maths and General Knowledge(Gk). - Logical Reasoning 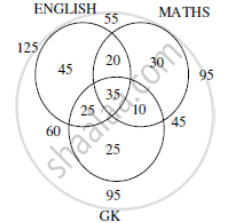 It is clear from the diagram that the number of students passed in all three subjects are 35.