Show by Means of Graphical Method That: V = U + At, Where the Symbols Have Their Usual Meanings. - Science

Show by means of graphical method that: v = u + at, where the symbols have their usual meanings.

Consider the velocity-time graph of a body shown in figure. 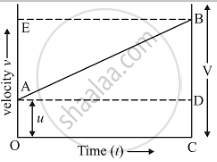 The body has an initial velocity (u)  at a point A and then, its velocity changes at a uniform rate from A to B in time, (t). In other words, there is a uniform acceleration (a) from A to B, and after time (t) its final velocity becomes (v) which is equal to BC in the graph. The time (t)  is represented by OC. To complete the figure, we draw the perpendicular CB from point C, and draw AD parallel to OC. BE is the perpendicular from point B to OE.