Read the statement and answer the questions that follow. A flower of brinjal has 520 ovules in its ovary. However, it produces a fruit with only 480 viable seeds. (a) What could have prevented the rest of the 40 ovules from maturing into viable seeds? Explain giving a reason. - Biology

Read the statement and answer the questions that follow.

A flower of brinjal has 520 ovules in its ovary. However, it produces a fruit with only 480 viable seeds.

(a) What could have prevented the rest of the 40 ovules from maturing into viable seeds? Explain giving a reason.

(b) Describe the development of a dicot embryo in a viable seed.

(c) Why certain angiospermic seed albuminous while others are exalbuminous? Explain.

Ovules develop into viable seeds which are capable of germination under suitable environmental conditions. Viability is influenced by various conditions like humidity, temperature and availibility of oxygen. Viability can be lost due to:

(i) exhausation of food around the embryo
(ii) damage to embryo
(iii) denaturation of enzymes
(iv) extremly high temperatures
(v) excessive dry or damp weather
(b) Development of a dicot embryo:
Zygote is the first cell of early embryo development in flowering plants including bean plant.
The zygote develops after the fusion of male sperm nuclei released from pollen grain with the egg present in the embryosac. This fusion is called syngamy.
The embryo develops at the micropylar end of the embryo sac where the zygote is situated. The zygote divides into a larger cell called suspensor cell towards micropylar end and a smaller cell called embryonal cell towards antipodal cells.
The suspensor cell divides mitotically to form 6-10 celled structure called suspensor. The last suspensor cell is called hypophysis that forms radicle tip. The zygote divides mitotically and gives rise first to the pro-embryo, then to the globular and heart-shaped mature embryo. A typical dicot embryo consists of an embryonal axis and two cotyledons. The portion of the embryonal axis above the level of cotyledons is called epicotyl. It contains the plumule (shoot tip). The portion below the axis is called hypocotyl. It contains the radicle (root tip). The root tip is covered by the root cap. 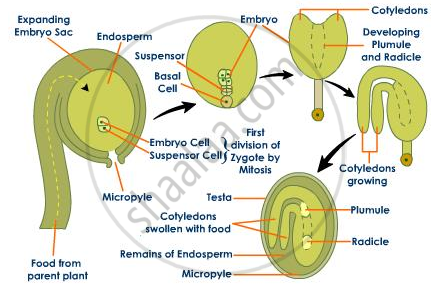 (c) When zygote forms the embryo the endosperm provides nourishment to the growing embryo. During this, the endosperm is utilised and eaten up. In the seeds like pea, gram etc, endosperm is completely eaten up by the growing embryo and the food for later development of embryo is stored in cotyledons which become massive. Such seeds are exalbumious. While in seeds like castor and maize the endosperm persists in the seed as food storage tissue and such seeds are albuminous.
Concept: Flower – a Fascinating Organ of Angiosperms
Is there an error in this question or solution?
2016-2017 (March) Delhi Set 2
Q 25.1 Q 24.2Q 25.2
Advertisement Remove all ads