Observe the following figure and answer the questions given under it: 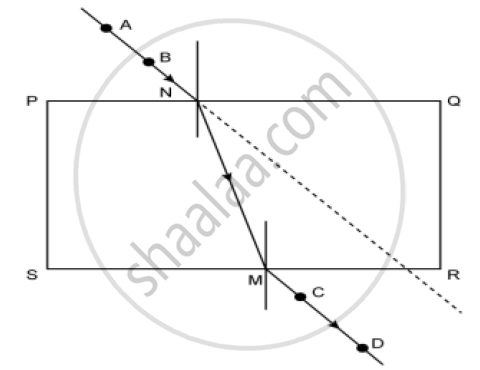 1) How many times does refraction take place in the above figure?

2) What happens to the ray of light when it passes from air to glass?

3) What happens to the ray of light when it passes from glass to air?

4) What are the rays AB and CD in the figure called?

An expression for heat produced in a conductor by using Joule's experiment:

1) Refraction occurs twice, once at Point N and the second time at Point M.

2) Air is rarer than glass. So, when light passes from the rarer medium to the denser medium, it bends towards the normal.

3) When light passes from the denser (glass) medium to the rarer (air) medium, it bends away from the normal.

5) Refraction of light is the phenomenon of change in the direction of propagation of light when it passes obliquely from one transparent medium to another.

Concept: Refraction of Light - Refraction Through a Rectangular Glass Slab
Is there an error in this question or solution?
2016-2017 (March)
Q 4.A Q 3.F.iiiQ 4.B.i
Advertisement Remove all ads