Given the Moment of Inertia of a Disc of Mass M and Radius R About Any of Its Diameters to Be Mr2/4, Find Its Moment of Inertia About an Axis Normal to the Disc and Passing Through a Point on Its Edge - Physics

The situation is shown in the given figure 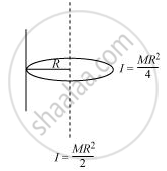 Applying the theorem of parallel axes:

We are given, moment of inertia of the disc about any of its diameters = 1/4 MR2

(i) Using theorem of perpendicular axes, moment of inertia of the disc about an axis passing through its centre and normal to the disc = 2 x 1/4 MR2 = 1/2 MR2