Look at the digital elevated model (DEM) of India and name the major physiographic divisions. - Geography

Look at the digital elevated model (DEM) of India and name the major physiographic divisions. 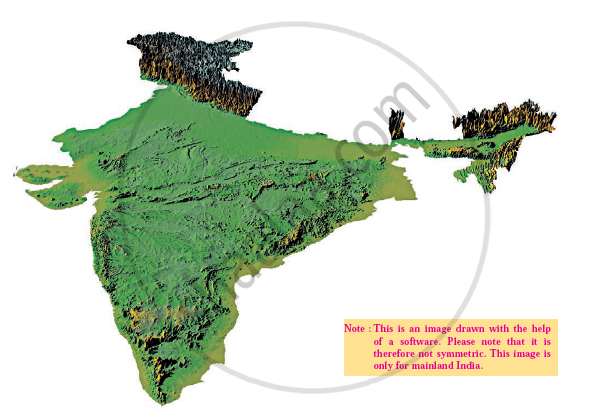 Following are the physiographic divisions:

The Himalayas are one of the young fold mountains in the world, extending from Pamir Knot in Tajikistan to the east. It is a major mountain system of the Asian continent. In India, it extends from Jammu and Kashmir to Arunachal Pradesh. The Himalayas is not a single mountain range but there are many parallel ranges in the system. The southernmost is known as Siwaliks, the youngest range. Next to Siwaliks are Lesser Himalayas, Greater Himalayas (Himadri) and Trans Himalayan range from south to north. These ranges are young to old respectively. These mountain ranges are also divided into Western Himalayas (or Kashmir Himalayas), Central Himalayas (or Kumaun Himalayas), and Eastern Himalayas (or Assam Himalayas).

They are divided into eastern and western coastal plains. The eastern coast borders the Bay of Bengal. It has formed as a result of the depositional work of rivers. The east-flowing rivers from all parts of the country empty in the Bay of Bengal on the east coast. Since the slope of the land is gentle, rivers flow at lower velocities and deposit the sediments brought with them at the coast. As a result, deltas are found along this coast. It is therefore difficult for ships to reach the East coast thus indicating less likely conditions favourable for the establishment of natural ports.

The plains of Punjab lie to the north of the Thar desert. This region is spread to the west of Aravalis and Delhi ranges which have formed as a result of the depositional work by river Sutlej and its tributaries. The slope of the plains is towards the west.

Concept: Physiography - Physiography of India
Is there an error in this question or solution?
Chapter 3: Physiography and Drainage - Exercise [Page 24]
Q 6 Q 5.3Next
Advertisement Remove all ads