Long Answer Question Explain the process of sewage water treatment before it can be discharged into natural water bodies. Why is this treatment essential? - Biology

Explain the process of sewage water treatment before it can be discharged into natural water bodies. Why is this treatment essential?

Explain the process of sewage water treatment before it can be discharged into natural water bodies.

The sewage in sewage treatment plants is carried out in two ways:

Secondary treatment: The effluent from primary treatment is passed to aeration tanks where the air is pumped into it. This allows the growth of useful aerobic microbes into flocs (masses of bacteria associated with fungal filaments) and microbes consume the major part of the organic matter in the effluent. This reduces the BOD (biological oxygen demand) of the effluent. The effluent is then passed into the settling tank where bacterial flocs are allowed to sediment. This sediment is called activated sludge. The small portion of this activated sludge is again passed to the aeration tank to serve as inocula. The remaining major part of this sludge is pumped into large anaerobic sludge digesters. Here, anaerobic bacteria digest bacteria and fungi in the sludge. During this digestion, bacteria produce a mixture of gases such as methane, H2S, and CO2. This treatment is essential as the sewage or municipal waste discharged into rivers, streams and other water bodies contains human excreta, organic wastes, and several pathogenic microbes. 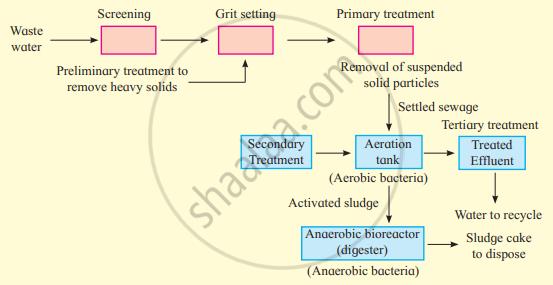 Before wastewater is made available for human use, it has to be treated properly, so as to remove organic matter, inorganic salts, and pathogens as well.

2. The suspended objects are filtered and removed. This is done in screening chambers.

3. The sewage is passed through screens or nets in the chambers. Larger suspended or floating objects are held back in the screening chambers.

4. These have to be removed before the biological treatment.

1. After the screening, the filtered sewage is then passed into a series of grit chambers that contain large stones (pebbles) and brick ballast.

2. Coarse particles settle down by gravity.

3. Thus, the passage of filtered sewage removes much of the coarse particulate matter.

a. After the preliminary treatment, the sewage water is pumped into the primary sedimentation tank.

b. The sedimentation of suspended solids or organic matter occurs in this tank.

d. The organic matter which is settled down is called primary sludge which is removed by mechanically operated devices.

e. The supernatant (effluent) in the primary sedimentation tank still contains a large amount of dissolved organic matter and micro-organisms which can then be removed by the secondary treatment.

a. The primary effluent is passed into large aeration tanks. Here it is constantly agitated mechanically and the air is pumped into it.

c. Flocs are the masses of bacteria held together by slime and fungal hyphae to form mesh-like masses.

d. These aerobic microbes consume the major part of the organic matter present in the effluent, as they grow.

e. Due to this BOD (Biochemical Oxygen Demand) of the effluent is significantly reduced.

a. Once the BOD of wastewater is reduced, it is passed into a settling tank.

b. Here the bacterial flocs are allowed to sediment which is now called activated sludge.

c. A small part of this is passed back into the aeration tank and the major part is pumped into large tanks called anaerobic sludge digesters.

d. In these tanks, anaerobic bacteria grow and digest the bacteria and fungi in the sludge.

e. During this anaerobic digestion, gases such as methane, hydrogen sulphide, CO2, etc. are produced.

f. Effluents from these plants (digester) after chlorination are released in natural water bodies like rivers and streams.

Concept: Microbes in Sewage Treatment
Is there an error in this question or solution?
Chapter 11: Enhancement of Food Production - Exercise [Page 271]
Q 4.1 Q 3.8Q 4.1
Advertisement Remove all ads