Explain the process of DNA replication.

The process by which DNA duplicates to form identical copies is known as replication.

1. After replication, each daughter DNA molecule has one old and other new strands.

2. As parental DNA is partly conserved in each daughter's DNA, the process of replication is called semi-conservative.

3. The model of semi-conservative replication was proposed by Watson and Crick.

4. The semi-conservative model of DNA replication using the heavy isotope of nitrogen N15 and E. coli was experimentally proved by Meselson and Stahl (1958).

Mechanism of replication is as follows:

a. Activation of Nucleotides:

i. The four types of nucleotides of DNA i.e. dAMP, dGMP, dCMP and dTMP are present in the nucleoplasm.

ii. They are activated by ATP in presence of an enzyme phosphorylase.

iii. This results in the formation of deoxyribonucleotide triphosphates i.e. dATP, dGTP, dCTP and dTTP. This process is known as Phosphorylation.

b. Point of Origin or Initiation point:

i. Replication begins at a specific point ‘O’ origin and terminates at point ‘T’.

ii. Origin is flanked by ‘T’ sites. The unit of DNA in which replication occurs is called replicon.

iv. At the point ‘O’, enzyme endonuclease nicks one of the strands of DNA, temporarily.

v. The nick occurs in the sugar-phosphate backbone or the phosphodiester bond.

i. Enzyme DNA helicase breaks weak hydrogen bonds in the vicinity of ‘O’.

ii. The strands of DNA separate and unwind. This unwinding is bidirectional and continues as ‘Y’ shaped replication fork.

iii. Each separated strand acts as a template.

v. SSB proteins remain attached to both the separated strands for facilitating the synthesis of new polynucleotide strands.

i. The point formed due to the unwinding and separation of two strands appears like a Y-shaped fork, called replicating/ replication fork.

ii. The unwinding of strands imposes strain which is relieved by the super-helix relaxing enzyme.

i. Each separated strand acts as a mould or template for the synthesis of a new complementary strand.

iii. RNA primer attaches to the 3’ end of the template strand and attracts complementary nucleotides from the surrounding nucleoplasm.

iv. These nucleotides bind to the complementary nucleotides on the template strand by forming hydrogen bonds (i.e. A=T or T=A; G = C or C = G).

ii. The process of replication always starts at the C-3 end of the template strand and proceeds towards C-5 end.

iii. As both the strands of the parental DNA are antiparallel, new strands are always formed in 5’ → 3’ direction.

iv. One of the newly synthesized strands which develop continuously towards the replicating fork is called the leading strand.

v. Another new strand develops discontinuously away from the replicating fork and is called the lagging strand.

vii. Okazaki fragments are joined by the enzyme DNA ligase.

i. At the end of the replication, two daughter DNA molecules are formed.

ii. In each daughter's DNA, one strand is parental and the other one is totally newly synthesized.

iii. Thus, 50% is contributed by mother DNA. Hence, it is described as semiconservative replication. 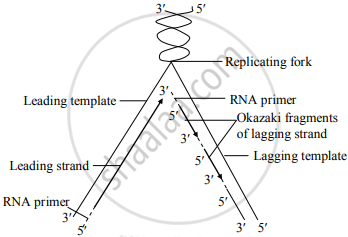 Concept: DNA Replication
Is there an error in this question or solution?
Advertisement Remove all ads
Chapter 4: Molecular Basis of Inheritance - Exercises [Page 93]
Q 5.1Q 4.5Q 5.2