Describe the process of fertilization.

Fertilization is the process which involves the fusion of the haploid male and female gametes resulting in the formation of a diploid zygote (2n). The process of fertilization is internal and it usually takes place in the ampulla of the fallopian/uterine tube. The fertilized egg or zygote further develops into an embryo within the uterus. 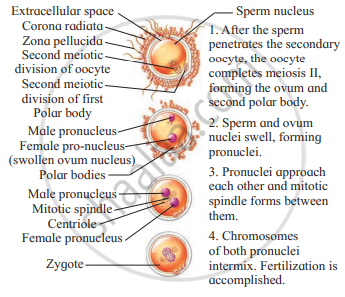 The mechanism of fertilization is as follows:

i. Movement of sperm towards egg:

The ejaculated semen is made up of sperms and some other secretions. This coagulated semen undergoes liquefication and sperms become active. Once the sperms reach the vagina around 50% sperms are demobilized/broken/destroyed and the remaining sperms undergo capacitation.

Capacitation:
Capacitation generally requires 5-6 hours during which the acrosome membrane becomes thin, Ca++ enters the sperm, and sperm tails begin to show rapid whiplash movements. As a result of capacitation, sperms become extra active and begin to start moving upwards from the vagina to the uterus and to the oviducts. Prostaglandins activate the sperms. The vestibular secretions of the female also enhance sperms' motility. The sperms swim at an average speed of 1.5 to 3.0 mm/min and reach the ampulla. The contraction of the uterus and fallopian tubes stimulated by oxytocin of females also aids in the movement of sperm. After capacitation, the sperms may reach the ampulla within 5 minutes.

ii. Entry of sperm into the egg:

Out of 200 to 400 million sperms, only few hundred manage to reach the ampulla, out of which only a single sperm fertilizes the ovum. After the sperm reaches the egg/ovum, its acrosome releases lysins: hyaluronidase and corona penetrating enzymes. These enzymes separate and dissolve the cells of corona radiata, so that the sperm head can pass through the zona pellucida of the egg. The zona pellucida has fertilizin receptor proteins (ZP3, ZP2). The fertilizin binds to specific acid protein- anti-fertilizin of sperm and brings about the attraction of sperms to the egg to enhance fertilization.

As the sperm head touches the zona pellucida in the animal pole region, its acrosome covering ruptures to release lytic enzymes, acrosin or zona lysin which act on the zona pellucida at the point of contact. This causes egg reaction during which a small fertilization cone/cone of reception is formed on the egg membrane. The sperm head comes in contact with this cone. It results in the production of a weak wave of depolarization. The plasma membrane of both cells dissolves at the point of contact.
The sperm nucleus and the centrioles enter the egg, while other parts remain outside.
As soon as the sperm head touches the vitelline membrane, a cortical reaction gets activated changing the vitelline membrane into a fertilization membrane by deactivating the sperm receptors of zona pellucida.
A distinct perivitelline space is created around the fertilization membrane.
This prevents any further entry of other sperms into the egg i.e. polyspermy is avoided.

The ovum before fertilization was at metaphase II stage. After the contact of sperm head to the vitelline membrane of egg, it gets activated to resume and complete meiosis II. After meiosis II, the second polar body is formed. The germinal vesicle organizes into female pronucleus also known as the true ovum or egg.

Concept: Fertilization/Syngamy
Is there an error in this question or solution?
Chapter 2: Reproduction in Lower and Higher Animals - Exercise [Page 48]
Q 6.3 Q 6.2Q 6.4
Advertisement Remove all ads