With the Help of a Labelled Diagram Describe the Internal Structure of Human Heart. - Biology

With the help of a labelled diagram describe the internal structure of human heart.

With the help of a suitable diagram, describe the conducting system of human heart

Internal structure of human heart: There is no connection/communication at all between the right and left sides of the heart. The right and left sides of the heart are separated by a partition called septum formed of myocardium covered by endocardium.
Interauricular septum is relatively thin, while interventricular septum is thick. Human heart is four chambered. It has two atria towards the base and two ventricles towards the apex.
Atria/Auricles: These are receiving chambers. These are thin walled, upper chambers of the heart. There are two atria, viz. right atrium and left atrium separated from each other by means of a thin partition called inter atrial septum. Inter atrial septum bears a oval shaped depression called fossa ovalis. Fossa ovalis is a remnant of an embryonic aperture foramen ovale between the two atria in the foetus. It closes at the time of birth.
Right atrium:
It receives deoxygenated blood by three veins:
i. The superior vena cava (precaval)
ii. The inferior vena cava (post caval)
iii. Coronary sinus
Coronary sinus carries blood from wall of the heart.
Openings of these blood vessels are present in right atrium.
The opening of inferior vena cava is guarded by a muscular flap, the Eustachian valve.
Opening of coronary sinus is guarded by valvular fold called valve of Thebesius or Thebesian valve.
The right atrium opens in right ventricle by means of an opening called right atrio ventricular opening.
It is guarded by a valve made up of connective tissue. This valve has three flaps, hence called Tricuspid valve. 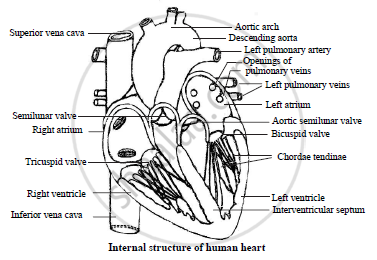 Left auricle/atrium:
It is the upper left chamber of the heart.
It is comparatively smaller and thick walled than right atrium.
It receives oxygenated blood from lungs by four pulmonary veins, two from each lung.
The left atrium opens into left ventricle by means of left atrioventricular opening.
The left atrioventricular opening is guarded by two flexible flaps called bicuspid valve.
Ventricles:
The ventricles are lower or inferior chambers of the heart. Ventricles are thick walled and are distributing chambers. There are two ventricles, viz. right ventricle and left ventricle.
Right ventricle is separated from the left ventricle by means of a thick, slightly curved partition called interventricular septum.
It prevents mixing of oxygenated and deoxygenated blood in the ventricular part of heart. The inner surface of the ventricle is thrown into a series of muscular ridges.
Ridges are of two types.
Small ridges are called columnae carnae or trabeculae carnae.
They divide the cavity of ventricle into smaller space as fissures.
Bicuspid and tricuspid valves are connected to papillary muscles by special fibrous cords Chordae tendinae. Other end of chordae tendinae are attached to special muscles called papillary muscles.
Right ventricle:
It is smaller than left ventricle and its wall is also thick.
It receives deoxygenated blood from right atrium.
It opens into pulmonary arch.
Opening of pulmonary arch is guarded by three semilunar valves. These valves permit the flow of blood from right ventricle to pulmonary arch. Pulmonary arch is divided into left and right pulmonary arteries, which carry deoxygenated blood to lungs

Concept: Circulatory Pathways - Human Circulatory System
Is there an error in this question or solution?
2014-2015 (October)
Q 8.1 Q 7.2Q 8.2
Advertisement Remove all ads