In the Given Figure, Sides of ∠ Pqr and ∠ Xyz Are Parallel to Each Other.Prove That, ∠ Pqr ≅ ∠ Xyz - Geometry

In the given figure, sides of `angle` PQR and `angle` XYZ are parallel to each other. 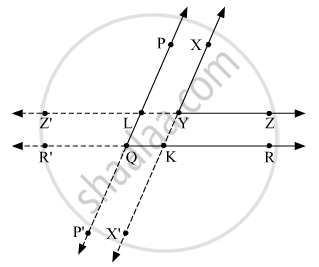 We have, XY || PQ and YZ || QR.
Let us produce rays YZ and YX backwards to point Z' and X' respectively such that ZYZ' and XYX' are the straight lines.
Similarly, produce the rays QP and QR to points P' and R' respectively such that PQP' and RQR' are straight lines.
Suppose line ZYZ' intersects the line PQP' at L and line RQR' intersects the line XYX' at K.
Now, line XYX' || line PQP' and line ZYZ' || line RQR'.