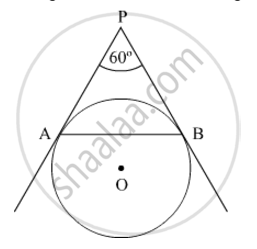 PA and PB are tangents drawn to the given circle from an external point P.

It is known that the lengths of the tangents drawn from an external point to a circle are equal.

In ∆PAB, sides PA and PB are of the same length.

It is given that

Since all angles of ∆PAB are of the same measure, ∆PAB is equilateral, with AP = BP = AB.
It is given that

Thus, the length of the chord AB is 5 cm.