How is Sound Produced in a Human Larynx and a Loudspeaker? - Science

How is sound produced in a human larynx and a loudspeaker?

Production of sound in humans
The larynx (voice box) is responsible for producing sounds in humans. It consists of two vocal cords. These cords are arranged in such a manner that there is a small gap between them. This small gap allows air to pass through. When we speak, air is forced into this small gap by the lungs. This prompts our vocal cords to vibrate and hence, produce sounds. 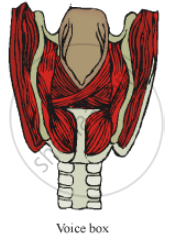 Production of sound in loudspeaker
A loudspeaker consists of following parts: Now, when variable current flows through the coil, magnetic field is produced around it due to electromagnetism and it behaves like an electromagnet. Because of this, the coil is repelled and attracted by the permanent magnet alternately. The screen attached to the coil moves back and forth due to the attraction and repulsion of the coil and hence, produces sound.

Concept: Production of Sound
Is there an error in this question or solution?
Advertisement Remove all ads
Chapter 15: Sound - Exercise [Page 109]
Q 4Q 3Q 5