The role of an emulsifier in stabilising an emulsion can be explained in two ways:

(a) It is believed that an emulsifier gets concentrated at the oil-water interface i.e., the surface at which oil and water come in contact with each other. It forms a protective coating around each drop of oil and thus, prevents the oil drop from coming in contact with one another. The oil drops remain suspended in water and are not coagulated. 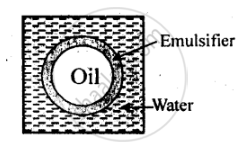 (b) According to an another view, the role of the emulsifier is the sjame as that of lubricant in a machine. Just as a lubricant reduces the friction in the various parts of machine, an emulsifier also tries to reduce the interfacial tension between oil and water by suitable means. Thus, oil and water remain in company of each other and do not get separated. The commonly used emulsifying agents are soaps, detergents, lyophilic colloids, proteins, gums, gelatin, caesin, agar etc.