Guess Select the Correct Alternatives from the Boxes - English

A1. Guess
Select the correct alternatives from the boxes : (2)

(1) The Olympic Games were originally held in honour of:
(a) The Priests (b) The Greeks
(c) The Spartans (d) Zeus

(3) All came to know of Olympia from the:
(a) Olympics (b) Spartans
(c) Syracusans (d) Athenians

Olympia, the original site of Olympic Games in ancient Greece is situated in a quiet, beautiful valley. The old ruins are shaded by evergreen oaks, pines and poplars, as well as olive trees. Olympia was never a city but a sacred ground occupied by temples and dwellings for the priests. At the centre was the enclosure known as Altis, dedicated to Zeus, the god of gods. It was in honour of Zeus that the quadrennial festival and the games were held.

The fame of Olympia rests largely upon Olympic Games. They were a great national festival of the entire Greek race. During the week of the festival the Athenians, the Spartans, the Syracusans and other groups, all forgot their narrow identities. They regarded an Olympic victory as the highest honour. The simple reward of a twig of wild olive immortalized the victor and his family.
The Olympic Games were held regularly in peace and in war at an interval of four years for over a thousand years from 776 B.C. till 393 A.D. Originally, men who spoke Greek as their mother tongue were allowed to compete in the Olympic Games. No married women were allowed to be present. The athletic programme was varied by the presence of historians, orators and writers. After each event a herald announced the victor's name and handed him a palm. On the last day the successful competitors were each given a garland of wild olive. 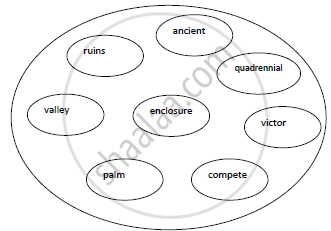 A3. Complete :
Complete the table and frame your sentence with anyone word : (2)

A1. Guess:
(1) The Olympic Games were originally held in honour of (d) Zeus.
(2) The Olympics were held after every (b) Four years.
(3) All came to know of Olympia from the (a) Olympics
(4) Altis was the name of a (d) Enclosure

A4.
(i) The old ruins are shaded not only by evergreen oaks, pines and poplars but also by olive trees.
(ii) Only unmarried women were allowed to be present.

A5. Personal Response:
Today the winners of the Olympic Games are awarded a gold, silver or bronze medal depending on
the position they hold in addition to a cash prize agreed upon by the organisers.