Given Below is a Picture of a Beautiful Scene You Saw on Your Trip to Varanasi, Uttar Pradesh. Write an Email to Your Friend Harsh, in Bangalore, Describing the Scene. - English - Language and Literature

Answer in Brief
Fill in the Blanks 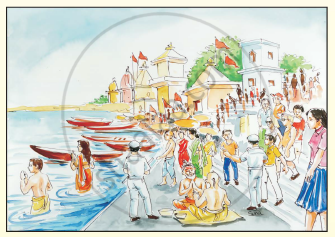 Given below is a picture of a beautiful scene you saw on your trip to Varanasi, Uttar Pradesh. Write an email to your friend Harsh, in Bangalore, describing the scene. To help you write your e-mail, firs  match the determiners in the box with items from the picture. (X indicates that the word does not require a determiner.) Apart from the determiners given in the box, you can also use other suitable determiners.

A  team of security officials

I hope everything is fine at your end. In this e-mail I am describing my visit to Varanasi, Uttar Pradesh.

I visited this religious centre last week with my parents. The place, the ghats at the river Ganga have a religious fervour. There flutter a lot of prayer flags. Several ghats have long steps where pilgrims bathe or dip in the holy river. The river Ganga flows majestically here touching the several mango groves and buildings. There is a big crowd of ascetics who sit scattered here and there on the ghats. They add a religious aura to the place. At the same time, hundreds of thousands devotees throng these ghats to dip in the Ganga when there are religious festivals like Kumbh. There is then a full team of security officials supervising the place and other things.

The place has a strange charm of its own. Even a non-believer can be influenced by the faith of the people and the religious fervour of the place. Several foreign tourists can be spotted wearing ochre turbans and dresses. The scene at Varanasi, thus, is a thing to memorize. It is always pleasure-giving. Do find time to visit it.

Concept: Grammar
Is there an error in this question or solution?
Chapter 1: Determiners - Exercise C [Page 6]
Q 3 Q 2Q 1
Advertisement Remove all ads